There might be a woman on the cover of Daisy Goodwin’s newly released Fortune Hunter, but this book is all about one sexy, sexy man: cavalry Captain Bay Middleton.

We first meet Bay as he attends the theater in dire need of a look at his ex-paramour and wife of another. He may be unlucky in love, but Bay is one of the best horsemen in all of England. He has his eye on competing in the Grand National: the race to end all races. He has the utmost faith in his horse, Tipsy (possibly the only healthy relationship he’s ever had with a female).

Meanwhile, a young woman by the name of Charlotte Baird has no idea her life is about to change. Charlotte is an heiress who despises the conventions of her late 19th-century life. She hates the parties and the men who flock around her, hoping to catch her interest and help her spend all her cash. Charlotte really just wants to be a photographer, and she’s even good enough to be featured at a royal art show. 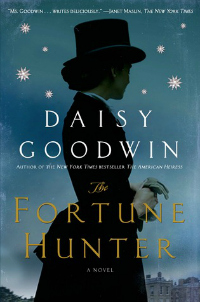 Charlotte and Bay meet through her brother, and they have an immediate connection. Bay isn’t like the other annoying brats who flock around Charlotte. Instead, he is funny, charming and dashingly good-looking.

Rumors follow him, of course. He’s a known ladies’ man, and despite his apparent true interest in Charlotte, it’s suggested he might be nothing more than a fortune hunter.

Bay is called away from Charlotte with the arrival of Empress Elizabeth of Austria. Her family and friends call her “Sisi.” She is considered the most beautiful woman in Europe, a bit older than Bay and known for her fearlessness in the saddle. Bay is asked to serve as her guide through the English hunting season, and he hesitantly agrees.

Books to read while waiting for Game of Thrones >>

Bay is as shocked as anyone when the empress starts showing interest in making her way into his bed. He has already fallen hard for Charlotte. They’re practically engaged. Still, Bay has always been reckless, and so is Sisi. She is interesting and brave. Can Bay resist her royal charms and famous good looks?

The Fortune Hunter is author Daisy Goodwin’s second book, following The American Heiress, another period piece rife with drama and intrigue. Goodwin likes to collect degrees from illustrious schools like Cambridge and Columbia, and she currently works as a producer in British TV. I don’t know if it’s her extensive education or her work with a visual medium, but Goodwin uses sensory imagery that truly puts you on the back of a horse with Bay and Sisi.

I could go on about Goodwin’s prose, but I’d really like to talk more about Bay Middleton. I mean, seriously, this guy is a Wow, capital “W.” He sounds hot, hot, hot, and he’s got the charismatic, passionate personality to back up his pretty face. I read a couple scenes over just to fully engage in the fantasy. Honestly, I have a huge crush on the conflicted captain.

RED HOT BOOK OF THE WEEK: The American Heiress >>

Goodwin knows how to write deep, complicated characters. Each of them (Bay, Sisi and Charlotte) have some big decisions to make as love gets involved. As I said before, though, this is truly Bay’s journey. He is the catalyst for the emotions of both women, and his actions decide the outcome of not only the nail-biting Grand National horse race but of his life in love.

I would highly recommend this novel to anyone who loves historical fiction, romance and intense character study. (Oh, and high tension. I was biting my fingernails by the end.) I am impressed by Ms. Goodwin, and having never read her before, I now feel the need to take a look at American Heiress. Of course, American Heiress will have one gaping hole that could only possibly be filled by my new literary crush, Captain Bay Middleton.