Harper Lee penned one of the most iconic pieces of American literature, To Kill a Mockingbird, and she’s famous for being reclusive and shy of the media. Then, in 2004, she opened her door for Chicago Tribune writer Marja Mills — and Mills’ life changed forever.

“I had no idea when I was sent to Monroeville that I would return to Alabama, much less that it would become such a big part of my life,” Mills said. “I went down there for a newspaper story and later returned when I was renting the house next door from fall 2004 to spring 2006.”

The newspaper story was about One Book, One Chicago: a program developed by the Chicago Public Library. In 2001, it chose To Kill a Mockingbird. The idea was that the whole city, regardless of race, age or demographic could read the same book and talk about it.

To Kill a Mockingbird author tricked out of royalties >>

Harper, or “Nelle” as she is known, was excited by this idea, as was her sister Alice. Alice (who Nelle calls “Atticus in a skirt”) was the one who first opened the door to the Lee home in Monroeville, Alabama, and Mills walked in. 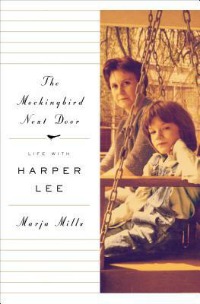 Her time spent with the sisters has been immortalized in the newly released The Mockingbird Next Door. According to Mills, “It’s a memoir really of the last chapter of life as they knew it.” This one-liner isn’t far from the truth, as Nelle suffered a serious stroke in 2007, and neither sister lives in the family home anymore.

When Mills first walked into the Lee homestead, Alice told her, “This is mostly a place to warehouse books.” The sisters were voracious readers. Due to a lack of space, they even kept books in the stove. Books were their most prized possessions. For instance, they owned several different translations of To Kill a Mockingbird.

Out for a pleasant afternoon drive, Nelle once saw a grand mansion and said, “We can appreciate beauty without having to possess it.”

12 Things Southerners want the rest of the U.S. to know >>

Nelle Harper Lee only ever wrote one book, but that book skyrocketed her into immortality. The overnight success was something of a shock but not to her readers. Mills is a huge fan of To Kill a Mockingbird. She first read it as a teen but has revisited it since.

Of its importance, Mills said, “Nelle drew such vivid characters that people feel a real attachment to. A lot of people view it as a beautiful novel but also as a guide to life, especially when it comes to Atticus Finch.” She added, “The book doesn’t change, but you do.”

There has been some controversy recently. Harper Lee has denied cooperation with Mills on The Mockingbird Next Door. Some of these denials could be blamed on Nelle’s ill health. Still, although Mills is saddened by the remarks, “I’m just glad these beautiful stories she shared with me could reach the public. The book is a chronicle of the last chapter of life as they [the sisters] knew it. I’m glad their stories are preserved.”

And the sisters have stories — many, many stories — except perhaps that one all-important one: Harper Lee’s second book. To Kill a Mockingbird was her only published piece. The whole world wants to know: Why?

Mills has a pretty good idea. “We were at a little hole in the wall diner. Nelle loved places like that,” Mills said. “We were just having our eggs and coffee, and a woman from the area recognized Nelle and came over and told her how much the book meant to her. They had a short conversation, and Nelle was gracious, as our eggs were getting cold. I knew as that woman walked away that she was delighted by that exchange. But as she walked away, Nelle turned to me and said, ‘I hope I didn’t disappoint her.’ That’s a glimpse at the weight of expectation.”

Maybe another To Kill a Mockingbird was just too much. Or, as Nelle told a friend, “I said what I had to say.”

The 88-year-old Nelle Harper Lee might not be with us much longer… or she could live to be 110. Either way, Scout, Jem, Atticus and Boo are immortal. We’ll always have them. Now, thanks to Marja Mills, we’ll also have Nelle’s personal stories: the final chapter of a life that has inspired millions.