Marvel debuted its latest superhero on The View today. It’s a character we’ve seen before, but now it’s presented in a whole new light. The new comic will focus on Thor as a woman.

The new comic will debut this October, penned by series writer Jason Aaron, who was abuzz with the news on Twitter this morning, as was Marvel executive editorial director Ryan Penagos.

“The inscription on Thor’s hammer reads, ‘Whosoever holds this hammer, if he be worthy, shall possess the power of Thor.’ Well it’s time to update that inscription,” says Marvel editor Will Moss also in the statement. “The new Thor continues Marvel’s proud tradition of strong female characters like Captain Marvel, Storm, Black Widow and more. And this new Thor isn’t a temporary female substitute — she’s now the one and only Thor, and she is worthy!”

The newly unveiled Thor marks Marvel’s eighth female superhero to lead a title. The move works to keep Marvel fresh and contemporary. Thor was originally created in 1962 by the great Stan Lee, and while the story and adventure still stands as a classic comic, times have changed. The gender switch marks a big move by Marvel to update and diversify their selection of stories to better cater to the diverse world we live in.

As The View also validly pointed out, from the image released by Marvel we can tell that the new Thor is a fierce woman who looks like she could take down some baddies, as opposed to the clichéd female superheroes we’re used to with skintight outfits and costumes they clearly can’t move in effectively without falling out. Sure, she’s still sexy, but we wouldn’t mess with her, that’s for sure.

Of course, with this switch comes plenty of questions about the identity and history of this new leading lady. We’re sure Marvel will be answering them in October with the release of the comic. 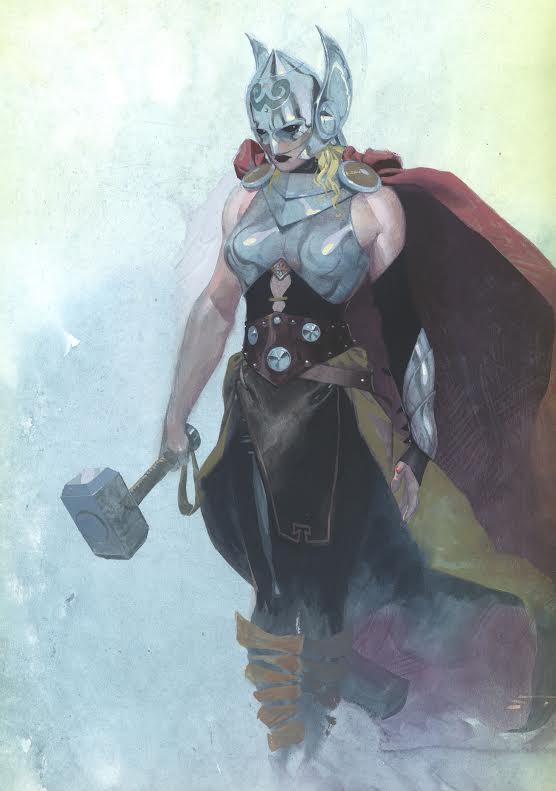 What do you think of Marvel’s move to make Thor a woman? Should they recast Thor in the movies?