David Mitchell is most famous for his time-jumping, indecipherable novel Cloud Atlas, eventually turned into a not-so-popular film. He returns in September with The Bone Clocks, but to build the hype, he’s doing some creative publicity.

As of last night, Mitchell began publishing his new short story, “The Right Sort,” in 140-character clips via Twitter. There will be 20 tweets at a time posted twice a day for the next seven days.

From what I’ve read so far, Mitchell’s social media experiment is a well-written, very British tale of Nathan and his mother who travel to Slade Alley to visit one mysterious Lady Briggs, both of them a bit high on Mum’s Valium. Mitchell said the young narrator is “basically thinking in tweets,” thanks to the drugs.

Cloud Atlas movie review: We are all connected >> 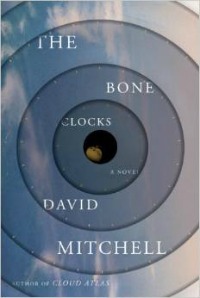 I’m impressed at the amount of detail and character Mitchell has already created in only two 20-tweet entries. I admit, I’m already hooked, and I hated Cloud Atlas. The man has a fantastic voice for the short form, and what’s shorter than Twitter?

No matter how good the story is, this is a publicity ploy for Mitchell’s upcoming release, The Bone Clocks. In The Bone Clocks, 15-year-old Holly Sykes is a lightning rod for psychic phenomenon. She runs away from home only to be hunted by dangerous mystics. The novel is 640 pages long in hardcover. Brevity is not Mitchell’s strong suit, and yet, Twitter seems to suit him quite well.

He only opened his Twitter account in April as a platform for The Bone Clocks and its promotion, but “The Right Sort” seems to be catching on.

Mitchell isn’t the first best-selling author to give Twitter fiction a try. His forebears include Neil Gaiman, Jennifer Egan and Melvin Burgess. Mitchell, though, is still wary of social media. He doesn’t feel a need to share his every thought with his fan base. He also doesn’t want to “add to this ocean of trivia and irrelevance.” A respectable opinion.

Still, even Mitchell must realize there is merit in social media. Otherwise, he wouldn’t be using Twitter in the first place. He does admit composing “The Right Sort” was extremely difficult, as it was written with Twitter in mind. So far, he’s done a fantastic job of using quick, pointed images and phrases to keep the reader reading — upside down, of course.

Books to film: which is better? >>

That’s the kind of funny thing. You can’t go to Mitchell’s Twitter feed and start reading. You have to go all the way to the bottom, where the story begins, and read backwards. I think you can handle it. We’re only about a day in. There’s plenty more to come in “The Right Sort,” and yes, I’ll be following. Mitchell’s narrator has me hooked.

I used to joke that Twitter was evil. I liked to come off as a terrible literary snob who would never, ever own a Kindle. But let me be honest: if Twitter is getting people to read good fiction, then more power to the blue bird. Authors are jumping on board, so with the added intellect maybe, just maybe, tweets will go from “what I had for breakfast” to “why are you reading this when you could be outside?”