Based on the New York Times best selling memoir by Cheryl Strayed, this new film is directed by Jean-Marc Vallée, who brought us Dallas Buyers Club last year — for which Matthew McConaughey won Best Actor. Could this mean Oscar No. 2 for Reese Witherspoon? 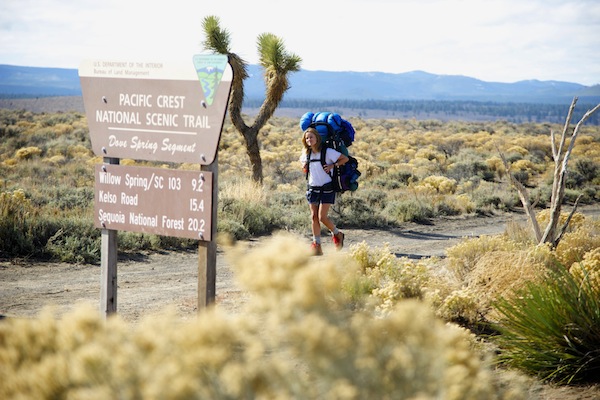 A powerhouse of an actress, Reese Witherspoon has taken on real-life figures in movies before. To play June Carter in >Walk the Line, Witherspoon had to learn to croon like a country singer. In >Rendition, she played Isabella Fields El-Ibrahim, the wife of an Egyptian-born chemical engineer and had to research military tactics and ethics.

In the new film Wild, she plays Cheryl Strayed, a woman mourning for her mother and dealing with a terrible breakup. She’s in so much emotional pain, she even turns to heroin and risky sexual escapades with strangers to dull the hurt. When none of it works, she decides to go on one long walk — 1,100 miles of the Pacific Crest Trail to be exact.

Her strategy is to walk off the pain, get out of her head and use this physical journey as a way to find inner peace. Can someone really find enlightenment from hiking a trail that traverses three states? We think it can happen and here’s why.

First, getting out in nature is a great way to connect with the earth and the beautiful parts of it. There’s so much ugliness in life, sometimes you just need to get out of the city, get away from the media and listen to the wind whip through the trees.

Second, planning a hike as long as this one is a good example of goal-setting. If a person can finish something as physically demanding as walking from the bottom of California to the top of Washington state, they can really do anything. And they will learn self-reliance on the way.

Third, the sense of accomplishment after achieving such a big feat would inspire self-confidence. Just having survived all the elements, from the desert to the mountains, would create a strong sense of self-worth.

Of course, there are real dangers along the way. So, instead of doing the trek ourselves, we’re very happy Witherspoon is starring in this movie, so we can sit back in the safety of a movie theater, suck a Diet Coke and reap the benefits from her character’s spiritual journey.