Olympic athlete and POW, Louis Zamperini, passed away earlier this month at the age of 97. Luckily, Angelina Jolie made a film about this man’s inspirational and courageous life.

British actor, Jack O’Connell (300: Rise of an Empire), takes on the daunting role of the rebellious Louis Zamperini. Despite being a troubled kid during the Great Depression, Zamperini discovered he had a talent for long-distance running and went on to compete in the 1936 Olympics. 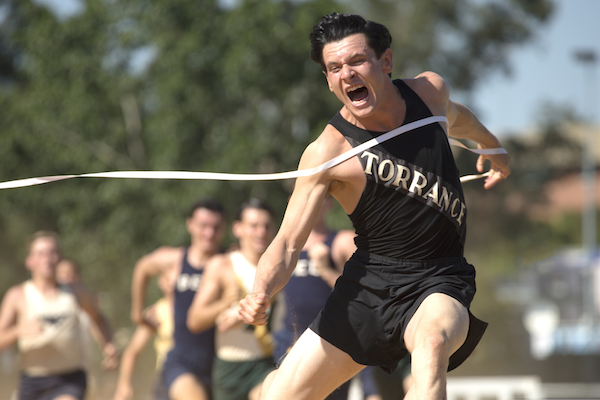 Though Zamperini finished eighth in the 5,000-meter distance race, he caught the eye of Adolf HItler during his final lap and Hitler even asked to meet the young athlete. News reports say that Zamperini climbed a flag pole and stole Hitler’s personal flag.

But Zamperini’s true courage was tested when his fighter plane went down in the South Pacific Ocean during World War II. He was imprisoned in a Japanese prisoner-of-war camp where he was beaten and ridiculed for his achievements at the Olympics.

Angelina Jolie keeping kids out of showbiz from now on >>

After a year and a day, Zamperini was finally released from the camp and returned home.

No Country for Old Men screenwriters, Ethan and Joel Cohen, have penned the script from Zamperini’s biography. As a director, Angelina Jolie didn’t break too much ground with 2011’s In the Land of Blood and Honey, but she wrote the script and writing may not be her strong point. We think it was a wise move to let the Cohen brothers handle the script so she could focus on the shots, acting and high drama of this startling tale of courage.

The only bad news about Unbroken is that it won’t be in movie theaters until Christmas Day. Luckily, we have the action-packed thriller, Dawn of the Planet of the Apes, to see this weekend.