It’s been five years since La Roux — basically made up of the creative genius Elly Jackson — made her 2009 debut with hits “Bulletproof” and “In for the Kill.” In that half decade, she’s not entirely switched genres, but you’d be sorely disappointed to pick up her new record, Trouble in Paradise, expecting to hear the same vibe as before.

To fully understand La Roux’s new album, you first have to look at how her genre has changed in the last five years. In 2009, musicians like La Roux or Chromeo were being delegated to electronica festivals or sent to play at late-night, tented discos. Even with decent cult followings and a major hit, most music involving synthesizers wasn’t getting the love it deserved, especially in America.

Things are different now. Things are better. James Blake won the most recent Mercury Prize and was up against other electronic-heavy bands: Disclosure and Rudimental. Daft Punk has dominated our airwaves and slayed at the Grammys. Chromeo is all over the radio… and the television, thanks to a new partnership. And La Roux? La Roux is set to takeover the charts.

Trouble in Paradise fits squarely into the new, radio-friendly sound of electronic music… mostly because a good chunk of the album isn’t computer generated. You’ll still hear the whir of the synthesizer and keyboards, but you’ll also note heavy bass, real guitar and actual piano riffs. It’s the same genre, but those live instruments bring a sense of warmth and aliveness to the music that is sometimes missing from synthpop. 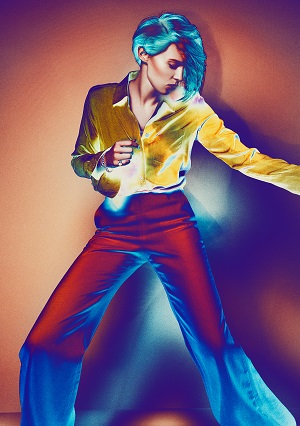 There’s also a lovable kitchiness to it. Like the overplayed motorcycle helmets and repetitive “up all night” of Daft Punk, La Roux has found her own way to add a touch a cheekiness to Trouble in Paradise. There’s a distinct disco quality to most of the songs, to her look and even to the look of the album. The album graphic looks like a Miami Vice throwback if we ever saw one.

Continuing to play on the familiar and fun, much of her lyricism employs concepts we’re already familiar with. “Kiss and Not Tell,” for instance, is one of the most fun songs on the record and relies entirely on the kiss-and-tell concept, but twists it into a slightly new feeling. And it’s all laid over early ’80s-tinged music and effects that beg for girls in neon and boys in Members Only jackets to dance… and kiss… and not tell.

Another standout track is the much slower, less cheeky “Let Me Down Gently.” Singing of an inevitable breakup with lyrics like: “I hope it doesn’t seem like I’m young, foolish and green/ Let me in for a minute, you’re not my life but I want you in it.” You know it won’t end well, but you’ll spend five and a half minutes waiting for things to turn around. Continuing on the breakup theme, “Tropical Chancer,” gets funkier and distinctively more disco — warning of a man who will use you until he finds a better opportunity. Attentive listeners will see it as the perfect summer fling breakup song. However, those who take it at the surface, can still bounce happily through the three-minute tune.

Proof of La Roux’s place in the scene and on the charts seems most prevalent on “Uptight Downtown.” We will get down to this track all summer long. We knew it the minute the song began. It sounds like the inevitable ’80s soundtrack standout — John Hughes would have loved La Roux. It feels like the anticipation that comes with standing at the end of a long line for a club.

The rest of Trouble in Paradise is what’s waiting for you once you get through the doors. And, trust us, you want to get through ’em.

For more music news and reviews, sign up for our newsletter >>