We loved him as the self-absorbed Liberace and Wall Street villain, Gordon Gekko. Now, the fearless Michael Douglas soars with his latest role as another prickly dude. SheKnows sat down with the indomitable actor to find out why he loves to play jerks. 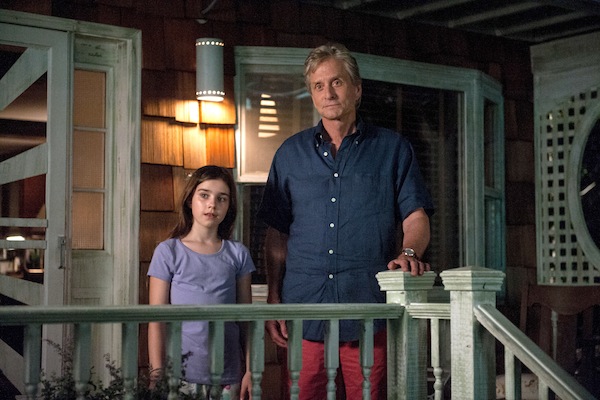 In And So It Goes, Michael Douglas plays Oren, a recently widowed real estate agent who, for lack of a better word, is a total a**hole. We wanted to know what attracted him to such a bad-tempered character. Douglas was very cheeky with his answer.

“I love a**holes! Most of my career was spent playing a**holes. There aren’t enough a**holes in movies! I try to fulfill that gap whenever I can. If there’s a good a**hole role to play that’s got a beginning, middle and end, I’m the man. Oren is a good character. People particularly love to watch a**holes who fall in love and, if you end up actually liking the couple in the end, you’ve done a good job.”

Douglas is obviously no stranger to playing men with bad attitudes — it seems to have served him well.

“Most of my career, I’ve played less-than-heroic types, and I enjoy the challenge of playing not very popular characters that basically can bring the audience around to their side, eventually.”

TRAILER: Will And So It Goes revive the rom-com genre? >> 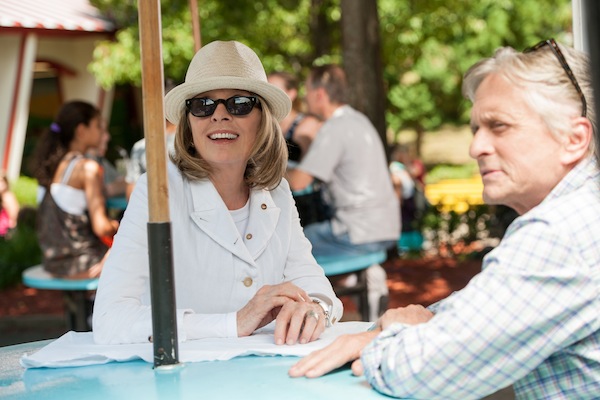 In the movie, Oren meets Leah (Diane Keaton), a lounge singer who’s recently lost her husband. We scratched our heads wondering how it was Keaton and Douglas had never made a movie together until now.

“I’ve always admired her from afar, loved her quirkiness and wanted to be part of it. It was a complete joy for me just because I work in a whole different way. Hers is, ‘What you see is what you get,’ and she has an unpredictability. As much anxiety as she talks about, she has the confidence to just exist, to be there, to play whatever comes up. She’s easy to listen to and that’s an important part of acting: listening.”

The best part about working with Keaton? “She’s funnier than hell!” Douglas said.

We wanted to know how his acting process differs from Keaton’s. He told us he’s a structuralist.

“I have a background as a producer, so I’m always looking at the whole movie, breaking down scripts. After all that, I’m kind of looking at what my motivation is and what my responsibility is to make the story work. Sometimes, I don’t have the freedom that Diane had. She actually brought me a lot of acting joy.” 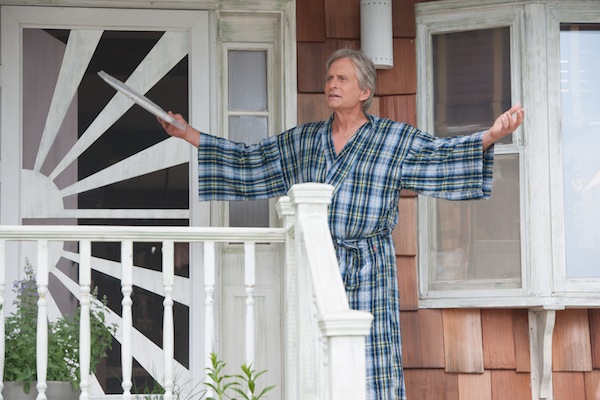 Early in the film, Douglas’ character has a few too many martinis and stumbles around, a wee bit tipsy. We wanted to know the secret to playing drunk on-screen. Douglas said jokingly, “Well, practice.” We had a good laugh and then Douglas got a bit more serious.

“I think a little bit goes a long way. The secret is to set it up in the beginning and not worry about. Just don’t overdo it. If that doesn’t work, just drink three martinis like Oren does in the movie.” We shared Susan Sarandon‘s method of spinning around in circles right before starting the scene. “That’s a good idea, but I think I’d puke,” said Douglas.

While we’re rooting for And So It Goes to do well at the box office, we’re also rooting for Douglas’ marriage to the stunning Catherine Zeta-Jones to succeed. We asked Douglas if he could share any wisdom he’s acquired about sustaining a marriage.

“Don’t take the persons closest to you for granted. Sometimes we tend to make more of an effort for strangers. But those closest to us are the ones we really have to be watching out for and taking care of.”

Sorry, Heidi Klum and Seal are not getting back together >>

Good advice, Michael. And So It Goes opens in theaters July 25.