I love Neil Gaiman; it’s true. I’ve read about six of his books and I met him once. (He gave me a hug!) I have nothing against his work, obviously, but it was announced today that American Gods is going to be a TV show and I just can’t take it.

Good things have been done with Gaiman’s work. For instance, young adult book, Coraline, was turned into an animated film and it was perfect, complete with button-eyed monster mom and creepy, carnival house. Then, BBC Radio did an adaptation of my favorite Gaiman novel, Neverwhere.

Why did these work? In the case of Coraline, it was YA, so it worked well as a cartoon. The imagery was perfect. Neverwhere worked because it was radio. Radio allowed me to listen while retaining the images my imagination had already created. I don’t think I can handle someone else’s vision of American Gods being shoved in my face. 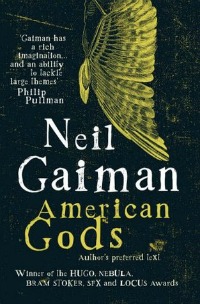 American Gods is a very, very difficult book to read. It’s up there on the list of Gaiman’s most famous (and weirdest) books, with good reason. I mean, there’s this one scene where a woman, well… she sort of digests a man with her private parts. The story itself is complicated as unlikely hero, Shadow Moon, must rally old gods to fight new gods. It’s a road trip story, uh, sort of.

Anyway, I don’t want it turned into a TV show. Starz is in charge and they’ve pulled in Bryan Fuller (Hannibal) and Michael Green (Heroes) to write the pilot. See problem number one? Yeah, Gaiman isn’t writing the pilot. Problem number two: Some books just shouldn’t be adapted.

Example A: The Great Gatsby. Hollywood has adapted this American classic twice. In both cases, they cast hot leading men and did wonders with costuming and setting. However, the movies just can’t stand up to F. Scott Fitzgerald. Although (thankfully) the 2013 version did end with the final lines of the literary masterpiece, it just wasn’t the same. And don’t even get me started on Jay Z’s ill-advised soundtrack.

Example B: Atlas Shrugged. This 1,200-page monster of a book has been split into three films and, so far, no one has seen them. No one. Ayn Rand considered Atlas Shrugged her manifesto and that’s what it is: a manifesto. The action ain’t kicking, folks, and there’s a 70-page-long speech. Although I read Atlas Shrugged (every single grueling word), I can give you the message in three paragraphs. Who thought it was a good idea to make this into a film?

Maybe I’m wrong. Maybe Starz’s take on American Gods will be just fantastic. That said, American Gods was not a book I read and thought, “I can’t wait to see the movie!” Some books should be left alone. When is Hollywood going to figure that out?