For a girl whose debut single hit iTunes less than a year ago, Tiffany Houghton has already created quite a buzz for herself, thanks to things like acoustic mashups and hours spent mingling online with fans. We caught up with the relentlessly-upbeat beauty to talk about everything from crushes to the American dream. 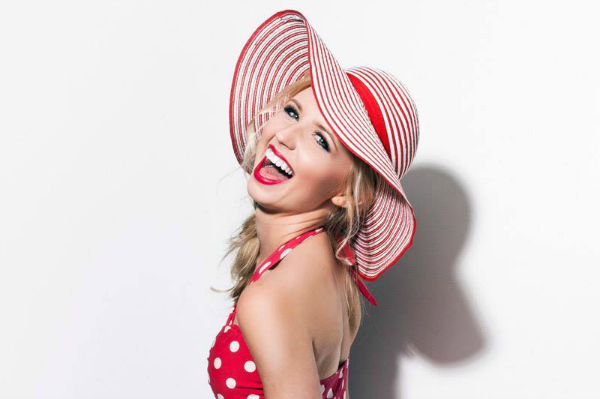 It’s shaping up to be a banner year for pop singer-songwriter, Tiffany Houghton. Not only has the pretty Nashville native garnered a cult following for her killer pipes and effortless charm, but she’s also about to head out with dreamy music duo, MKTO, for the American Dream tour.

Houghton — who has an endearing way of talking to you like she’s known you forever — is walking on air these days, so it seems pretty fitting her debut single is an infectiously-happy-go-lucky tune called “High.”

When we asked her about hitting the road June 27, she couldn’t help but gush. “Oh, my gosh, I’m going to be performing this summer and I’m kind of excited to hear the response from fans and play the songs live with my band,” she told us. “And more than anything, I’m really excited to perform — maybe that’s a cliché answer, but I’m just happy to be onstage.”

Of course, it probably doesn’t hurt that she’ll be sharing that stage with MKTO’s Malcolm Kelley and Tony Oller, essentially making her the envy of teenage girls (and, ahem, not-so-teenage ones) everywhere.

But while the object of Houghton’s fangirl affection has been known to rock a stage, he won’t be on hers this summer.

“Honestly, I just have such a loyalty to Nick Jonas,” she laughed. “You know your first fanboy that’s on your wall that you’re, like, in love with? He was that first love for me, so I will always love him. He will always have a special place in my heart.”

And although she does admit her loyalty has wavered over the years, thanks to the likes of Channing Tatum and Harry Styles — she’s “a huge One Direction fan” — Houghton is the type of gal who believes in the long haul.

Her songs, “High” and “Love Like That,” were both inspired by her hopeless romanticism — the latter specifically by an elderly couple she sat near on a flight.

“It was so cute!” she said of the pair. “They walked in the airplane and he was holding all of her bags and holding her hand. Then they sit down, and it was, like, a five-hour flight and they were cuddling the entire time. I was like, ‘That’s what I need in my life!'”

So, we had to ask: Is she cuddling up to anyone at the moment?

“Other than my stuffed bunny, no,” she joked. “His name is Butter, and he will now be joining me on all my tours, because I got him on my first tour and he just kept me such good company and got me through a breakup. So I keep good-ol’ Butter with me.”

INTERVIEW: Vanessa Carlton on what to expect from her next album >>

For now, Houghton’s real love affair is with her music. The musician — who cites singer-songwriters like Hayley Williams, Vanessa Carlton, Taylor Swift and Michelle Branch as inspirations — hopes to build a career that is authentic to who she is.

In fact, being compared to Taylor Swift early in her career helped shape Houghton’s vision for her future as an artist. Although, at first, she didn’t like being compared to someone else so often, she now realizes “there’s no better compliment” than being likened to an artist who has managed to create such an intimate connection with her fans.

“That’s something I want to do in my career… create a community within my fan base of people that are just nice to each other. I think that’s so important. If I can really make a difference in the world, that’s how it’s going to be — if I can make other people be good to each other,” she mused.

“I just really love women who have been such an integral part of their story and they have really taken part in their art,” she elaborated. “So, you know, while there are so many different pieces that are important to the puzzle, I think that the most important for me is the songwriting and making sure that my message and my image is uplifting and good and honest.”

INTERVIEW: SOJA on why we need more reggae on Top 40 radio >>

In that vein, Houghton has a couple of stellar role models at home, too.

“Talk about the American dream! My mom and dad got married when they were 18 years old,” she shared with us. “They had no money to their names, but my dad had this huge dream, so they moved out to Dallas together just after getting married and pursued something no one thought they could do. Everyone doubted them and they had all the cards stacked against them, but they sacrificed and they worked really hard and made it work.”

It’s those values Houghton credits as the reason she’s been able to accomplish what she has and for the exciting precipice of her career on which she’s now perched.

“It’s because I grew up in a home where my parents said, ‘You can do anything you want to do if you put in the time and the work and you recognize that it’s gonna break your heart and you’re going to have to keep working and keep trying. No one else can do it for you — you’re going to have to be the person that makes it happen for yourself.'”

Don’t miss Tiffany on tour! Click here to check the dates and find a stop near you.