Just when we thought Robin Thicke couldn’t out-creep himself, he released the video for “Get Her Back,” which is being hailed as the most public act of desperation in recent history. Here is what this video is really saying.

Watch this video and then keep reading for the underlying meaning.

“I know nothing about women”

Where to begin? The only thing most women detest more than being cheated on is being publicly humiliated. Being the victim of a cheater is public humiliation enough. In Robin Thicke‘s “Get Her Back” video, Thicke has to amp up his estranged wife’s (Paula Patton) embarrassment by revealing snippets of what appears to be a private conversation. How ironic that Thicke’s video includes the line, “You embarrassed me,” and then he goes on to release a video more embarrassing than “Blurred Lines” (and that’s really saying something).

Paula Patton on divorce: “There’s a deep love there” >>

“I have no friends”

Who let this guy make this video? Where are the people in Thicke’s life saying, “Dude, just don’t.” He doesn’t have a solitary friend — man or woman — who watched this farce pre-release to delicately say, “This is creepy. What’s with all the skulls? Women don’t dig dead stuff. You may want to ease off on the drowning references and the fingers-to-the-temple business, too. Also, it may not be a bad idea to rethink the shirtless thing.”

Robin Thicke laying it on thick for Paula Patton >> 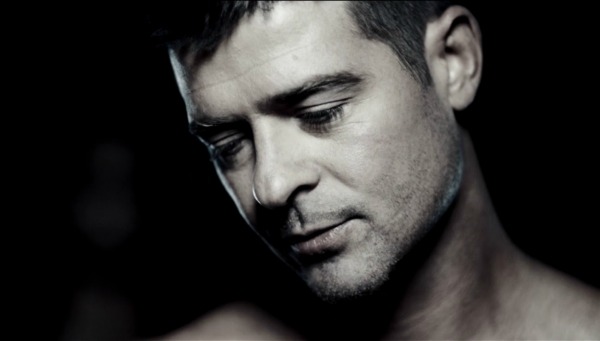 Classic. Guy cheats on his wife and he’s the victim. “I wrote a whole album about you.” Neat. Here’s a clue, fellas. Women can go onto Amazon and buy whatever album they want. We’ve yet to find a place where you can buy a guy who is guaranteed not to cheat on you. Don’t write us a f***ing album. All we ask is that you don’t cheat on us. Sheesh. How freakin’ clueless can one person be? Thicke goes on to sing, “It’s so hard.” Hard on whom? Groveling is hard? Making a cheesy video is hard? Having your a** handed to you publicly by the person you pledged your life to is hard, buddy. Is anyone falling for this “poor me” junk?

No matter how many cautionary tales there are out there, people are not getting the message. Just. Don’t. Cheat. In this song, Thicke croons, “I never should have raised my voice or made you feel so small.” True, but we don’t think Patton is telling Thicke to bugger off because he raised his voice. What this line should say is, “I never should have put my man parts where they didn’t belong.” In Thicke’s meager defense, at least he’s groveling. Lots of people who have been cheated on are just met with justification, or worse having the blame projected onto them. He’s willing to publicly debase himself to get his gal back, and that’s kind of endearing — in a super clueless, creepy kind of way.