Kathleen Robertson knocks it out of the park in the third episode as Mulligan battles with her conscience after shooting and killing an abusive suspect. 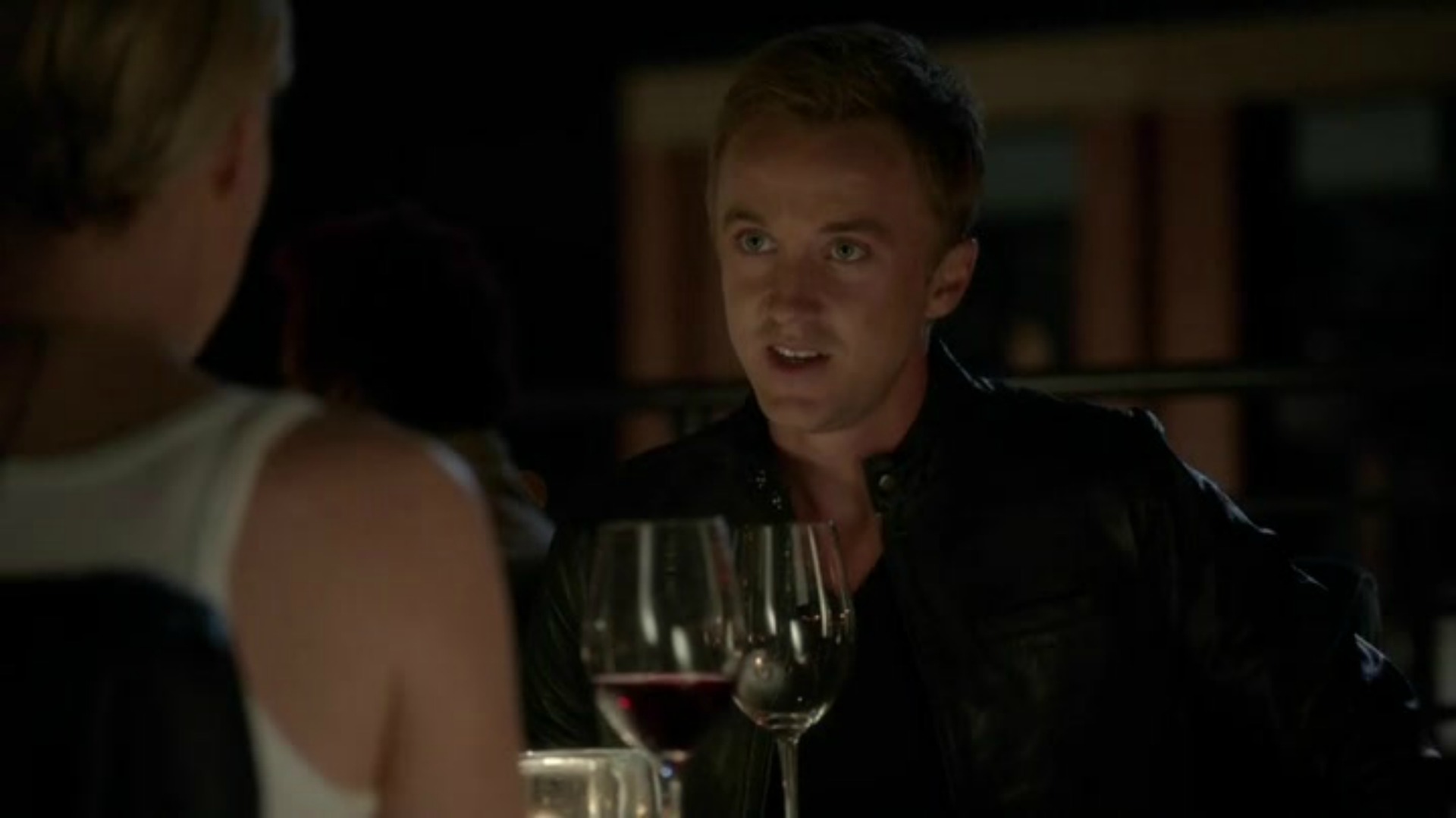 While Murder in the First has been building to the arrest of Erich Blunt (Tom Felton) since the pilot, his moment of shame in the last minutes fades into the background of the third episode’s much stronger B-plot: Hildy Mulligan’s suspension.

This week was Kathleen Robertson’s chance to show her stuff, and she absolutely nailed it. From the first week, her Mulligan has been the most compelling reason to keep returning to this show. Her partnership with English (Taye Diggs) is such fun to watch, but of the two, we’ve seen more layers to Mulligan. It’s not just that Mulligan is good at her job, though of course she is. She’s quick and clever and has shown herself to be more than a match for Erich, but she’s also prone to moments of tenderness and is never portrayed as weak for allowing herself to show her feelings: Her gentleness with her daughter juxtaposed against her desire to rebuild a personal life for herself after her divorce, her tears at English’s wife’s funeral against her hard-line approach to Erich’s first interrogation. Mulligan is a rarity among female characters, particularly on procedural cop shows. She is allowed to be hard and soft at the same time. She’s an equal balance of pragmatism and hope, and as a result, we get a fully realized woman, not a cardboard archetype of the tough lady cop.

Murder in the First review: We all had a dream world as kids >>

D-Hop, the young boy who identified Walton as the man who shot Erich’s biological father, comes to Mulligan for help out of desperation. His mother is trapped in an abusive relationship with a man who routinely beats her to within an inch of her life, and D-Hop has run out of options. He’s too small to protect his mother, and he’s too frightened of the possibility of being sent into foster care to turn anywhere else. In spite of the pressures involved in mounting the case against Erich, Mulligan agrees to take the time to help the boy and his mother.

Mulligan does what she can, but as she knows from her personal experience with an abusive ex, it’s impossible to help someone who does not want to be helped. D-Hop’s mother flatly refuses to admit there’s a problem, and Mulligan, while clearly frustrated at not being able to do more, accepts the situation for what it is. Hope and pragmatism — that’s the way that Mulligan is able to both perform her job and allow herself a life beyond it, as well. It’s how she compartmentalizes.

Until D-Hop calls her cell while she’s in the middle of a date, begging for help, because it’s happening again. Mulligan immediately leaves the restaurant and radios for backup, but when she arrives at the apartment and hears the cacophony inside it, she makes the decision that there’s not enough time to wait. She enters to see D-Hop’s mother’s boyfriend beating the woman to within an inch of her life and D-Hop cowering beneath a table with a bruised face. Angry at the interruption, the boyfriend approaches Mulligan with a knife in his hand, clearly intent on putting it to use. She gives him a warning, he doesn’t back down, and that’s when Mulligan shoots him square in the chest.

One shot would have done the trick. She empties the entire clip.

Murder in the First review: Freaky is good >>

From there, Mulligan is a woman adrift. She understands logically that she made the best choice available to her in the moment while simultaneously understanding that her own history played a very large part in the way she handled it. “You stepped on a roach,” English says, trying to comfort her with the knowledge that the dead man certainly deserved it, with his mile-long rap sheet and tendency to beat on a woman and her defenseless child. “It’s that simple.”

But a man is still dead, and he’s dead because of her. Mulligan is clearly straining to hold herself together in the wake of it, and her mandatory 10-day suspension from her job isn’t helping. English is on her side, and even their boss, Koto (Ian Anthony Dale), seems reluctant to pull her off the case they’ve been steadily building against Erich, but it’s departmental policy. Still, she’s trembling with it, not sleeping, filling her time by making elaborate school lunches for her daughter and trying to process the fact that she’s killed a man while simultaneously trying to force herself to move past it.

However, there’s upside to her suspension. When English and the rest of the team finally arrest Erich for the murder of Cindy after receiving fairly compelling DNA evidence that suggests he was her baby’s father and that he was the man she performed oral sex on the night that she died, Mulligan’s not in on the arrest. She’s at home, watching along with the rest of America as the billionaire boy genius gets handcuffed. After her date with Erich in the second episode, her absence may leave them some wiggle room when it comes to further interaction. It could leave her in a position where he’s still able to trust her. Always the hope, always the pragmatism.

In the wake of Mulligan’s story, the mounting case against Erich and the red herrings of the other suspects feel as thin as they have in previous weeks. Erich has taken Warren Daniels (James Cromwell) up on being his lawyer, we discover he has a fondness for drug-laced rough sex, and another woman comes forward to confess that once upon a time, Erich raped her and is most certainly capable of this kind of violence. It all leads up to Koto deciding they’ve mounted enough evidence to finally make an arrest. These things push the season’s arc forward, yes, but in the end, it’s still standard police procedural fare, the kind audiences are familiar with.

Mulligan’s demons are infinitely more interesting to watch unfold, and we’re holding out hope that it’s a thread that continues to play out this season.

Murder in the First airs on TNT on Monday nights at 10/9c.