OK, too far, America. Too f’ing far. What has happened to this country’s perception of sexy? For the past several years, pop icons have shoved their perception of sexy down our throats. Now throngs of women are lusting after convicted felon Jeremy Meeks? There is something decidedly wrong with this picture.

Like most Americans, today I woke up to trending stories that were all trumped by the news that a criminal’s mug shot had taken over social media. Just, whaaaaaa? I seriously just wanted to go back to bed. Jeremy Meeks, a hardened criminal from Stockton, California, was arrested in a gun sweep. This is the mug shot that is making women wish that Meeks had chosen them as his victim (ewwww!) and has prompted the Twitter response #freeJeremyMeeks. 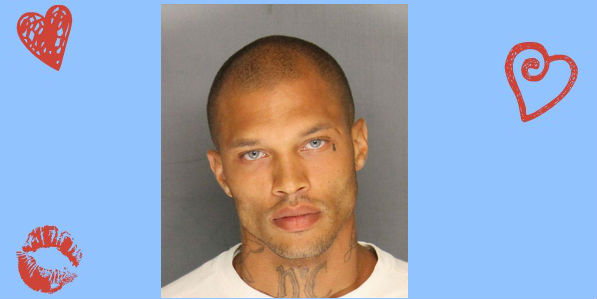 Yeah, so we sort of get it. The guy has great features, but one of those features is being a menace to society. Other features include teardrop and neck tattoos, which typically symbolize murdering someone. The internet is making a big deal about how nice his eyes are. Sure, they’re nice. They’d be even nicer if there was a soul behind them.

Score a victory for violent criminals everywhere. If you’re a felon but are easy on the eyes, society will launch a campaign for your freedom. Folks are really putting the “twit” in “Twitter” with this. Is this a joke? Are we being punked? Mr. Meeks isn’t the only example of how skewed society’s definition of sexy has become.

Fat-bottomed girls owe Kim Kardashian a debt of gratitude for making big backsides a thing. That said, one of her latest bikini shots shows her swimsuit bottom wedged uncomfortably betwixt her buns. It is, as my grandmother used to say, “vulgar.” It isn’t sexy. If you threw a couple of cellulite dimples on that can, it would be downright unsightly. If Kim wasn’t who she is and we were in the pool with her and saw this girl trying to haul her big tookus out of the water, would we think it was sexy? Or would we look away so she could continue her embarrassing struggle in private?

Kim Kardashian flaunts her butt and boobs once again >>

And then there is the mistress of misguided sexiness, Miley Cyrus. Frankly, we can stomach a street thug being labeled “sexy” over Cyrus’ disgusting antics. While on tour, Cyrus has been treating concertgoers to what should be private moments with her G-string. (Sex with a G-string? Someone is desperately in need of a boyfriend.) Behold this image, a little something we like to call “everything that is wrong with the world today.” (Believe it or not, dear reader, this is one of Cyrus’ more benign onstage images. At least it’s Friday, so you can’t accuse us of ruining your week.) 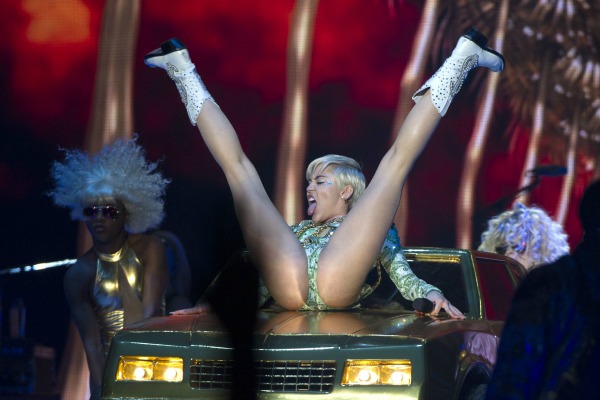 What do you think readers? Don’t we have a right to surf the net for interesting news without being bombarded by grossness? Should we launch our own Twitter campaigns — #hardenedcriminalsarenotsexy, #mileycyruspleasestophavingsexwithyourclothes #kimsbighungrybuttisnothot? We’re open suggestions.