Spain has a young and glamorous new king and queen today after Felipe VI and his wife Princess Letizia took over the monarchy.

Felipe VI became the new king of Spain in a decidedly low-key ceremony designed to respect the country’s austerity measures in the wake of a devastatingly poor economy — but his wife Letizia looked as glamorous as ever.

Filipe’s father King Juan Carlos handed over the crown following a series of scandals, including the husband of Princess Cristina being charged with embezzling millions of euros of public funds and Juan Carlos himself spending public money to go on an elephant-hunting trip in 2012.

Neither Juan Carlos nor Cristina attended the coronation ceremony so as not to take attention away from the new monarch. 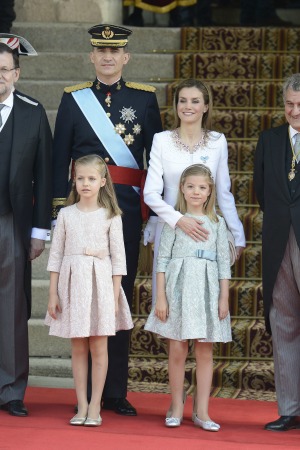 “You will find in me a loyal head of state who is ready listen and understand, warn and advise as well as to defend the public interest at all times,” Felipe said in a speech to his new subjects.

“The monarch wants to be close to citizens… ensuring it can preserve its prestige and dignity. Now more than ever, citizens of Spain are rightly demanding fundamental ethical principles should govern our public life. The king should not only be a reference but who serves all citizens of Spain.”

But not all was subdued. The new royals are young and glam — especially former Princess and now Queen Letizia — and there was much smooching to be seen on the palace balcony. Like Kate Middleton, the new consort came from common middle-class beginnings and is a European fashion icon — and of course both have beautiful hair. The daughter of a nurse and a journalist, Letizia worked as a reporter herself on gigs with CNN and Bloomberg, even winning the Madrid Press Association’s Larra Award before meeting Felipe on an assignment.

The royal engagement was announced in 2003 just days after she quit her job. The couple has two daughters, Leonor, who will herself become queen one day, and Sophia.