Murder in the First turns up the heat with its excellent character work but hits a standstill when the tone turns toward standard procedural fare. 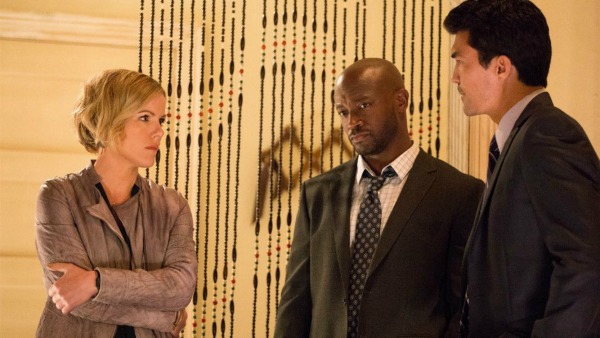 This week’s Murder In The First picks up shortly after we left off last week. English’s beloved wife has finally passed away, and as he lays her to rest, we cross-cut back and forth with Cindy’s autopsy in a series of well-timed shots that emphasize the similarities of the deaths of these two women. Both of them gone before their time, both cheated out of a future they’d planned on — but the hitch in Cindy’s death throws even the medical examiner off his game.

Cindy has definitely been ruled a homicide, only it turns out that she was two months pregnant when her neck was broken, making it a double homicide.

Murder in the First review: We all had a dream world >>

The driving force behind this week’s episode is English and Mulligan’s search to collect DNA evidence that can tie someone to Cindy’s murder. Two new suspects are added this week: Mark Strauss, Cindy’s estranged husband, and Bill Wilkerson (Steven Weber), the pilot of Erich’s personal jet and one of the last people Cindy sent a text to the night before she was killed. Additionally, it’s discovered that Cindy performed oral sex on someone the night she was killed, and the right DNA evidence should put one of the three men in her apartment at the time of the murder.

The show, however, is at its best when it sets aside the Law & Order: SVU trappings and focuses on the relationships of the characters. We’ve seen mysteries like this unfold in countless police procedurals, and the time spent on medical details and tracking down suspects drags down the truly excellent character work that’s being expanded on.

Taye Diggs and Kathleen Robertson both get spectacular moments to shine this week. Their friendship is, as ever, one of the most enjoyable things about Murder In The First thus far. Mulligan weeps wordlessly at English’s wife’s funeral, never approaching her partner, never saying a word, simply showing her loyalty and respect with her presence.

Once they’re back in the office, it’s business as usual. It’s as if the funeral never happened. They tease each other, they slap high-fives, they run the good-cop-bad-cop scheme with practiced, efficient ease and they take real joy in working together. It’s the most basic tenet of television writing: show, don’t tell, and it’s executed to such great effect this week. Mulligan knows that what English needs the most right now is not to be coddled. He needs one part of his world to go on turning the same as it always has, and that’s the gift she gives to him without the show going out of its way to overemphasize it.

Additionally, James Cromwell as Daniels, the trial lawyer that David Hertzberg (Richard Schiff) instructs Erich to keep on retainer, is a welcome addition to the cast with only one scene. “Daniels defending Jesus in front of Pontius Pilate: Worst case scenario, he would have gotten his charges knocked from king of the Jews to disorderly conduct, with credit served for time in the lions’ den. Maybe some community service,” Hertzberg muses to a frustrated Erich, and we get the sense that Daniels is exactly as good as promised. Erich is a spoiled, petulant child who refuses to believe that anything relating to Cindy’s murder could actually touch him; Daniels smiles like an indulgent grandfather who knows the kid will come around.

In spite of his protests, however, Erich (Tom Felton) has gotten increasingly more nervous. Nerves make him angry, and we’ve seen that Erich is a character for whom having control is the most important thing in the world. Early on in the episode, he barks orders at his design team when the pixelated water of the San Francisco Bay is too clear in their virtual reality game and he lost it at Cindy when she spilled red wine on his shirt. He has no tolerance for little mistakes, and when it occurs to him that he’ll be one of the primary suspects in dealing with Cindy’s murder, he quietly rages and lets it build up. This was not part of his plan, and it’s a problem that he wants solved as quickly as possible.

When he swaggers into English and Mulligan’s interrogation room, voluntarily submitting himself for questioning, he oozes practiced sympathy and platitudes about what a great girl Cindy was. He believes his wealth and power protect him, and taunts Mulligan with it once English clears the room to let her work her magic. If Erich is innocent, it’s not enough for him to be innocent. He also wants the victory of humiliating anyone who dared to try to wrest that precious control away from him, who dared to interfere with his life.

It’s a challenge Mulligan is more than up to, and when she realizes that she’s piqued Erich’s sexual interest, she’s ready to play it up. Robertson and Felton have surprisingly strong chemistry — the cop and the possible criminal flirting over drinks and dinner. He wanted to scare her in her office, but now he wants to win her over: control, always control. There’s more than one way for him to take it, and Mulligan lets him believe he’s winning right up until the moment she kisses him… with a giant wad of gum tucked into her mouth.

She’s got that last, hard-to-get DNA sample. She’s the one with the control.

More moments like those and Murder In The First goes from passable summer fun to something unmissable.

Murder in the First airs on TNT on Monday nights at 10/9c.