It was a busy weekend for the royals, including Duchess Catherine: a charity polo match, Prince William’s first Father’s Day and the Order of the Garter service.

The royals had a very busy weekend, including Prince William’s first Father’s Day, Prince George’s first photographed steps and the ceremonial Order of the Garter service — and the Duchess of Cambridge was there for all of it.

Kate and Sophie, Countess of Wessex (the wife of Queen Elizabeth’s youngest child Prince Edward) looked on proudly as the Knights of the Garter — including their husbands — passed by. Kate recycled a lovely pale blue Christopher Kane coatdress for the occasion, while Sophie glammed it up in a cream dress with a fluttery feather collar.

Twitter lit up with additional photos of the grand ceremony.

Flashback: See Kate’s first official Order of the Garter service as a royal in 2011 >>

What is this Order of the Garter business? The official website of the British monarchy explains.

“The Order of the Garter is the most senior and the oldest British Order of Chivalry and was founded by Edward III in 1348.

“The Order, consisting of the King and 25 knights, honors those who have held public office, who have contributed in a particular way to national life or who have served the Sovereign personally.” 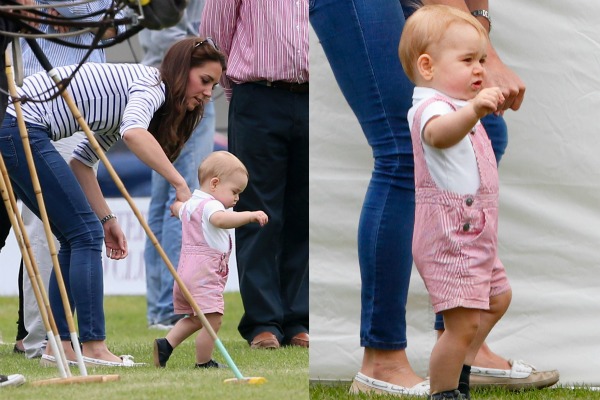 The previous day, Princes William and Harry competed against each other in the Jerudong Trophy polo match, an annual event held to raise money for one of the brothers’ nearest and dearest charities: Centrepoint. The organization aids the homeless and was one of Princess Diana’s favorite projects. WellChild and Child Bereavement UK also benefited from the match.

But it was Prince George who stole the show, taking his first publicly recorded steps at the match, kicking a toy soccer ball and playing with a polo stick — obviously a young sportsman in the making like his royal relatives before him.

PHOTO: Prince George has a hopping good Easter at the zoo >>

His happy and relaxed mom helped him toddle along in the royal tent as they cheered William on, wearing skinny jeans and the same Breton striped top we’ve seen several times since the couple’s trip to New Zealand and Australia — including the day Kate handily beat William in a yacht race.