Many women may feel pressured to lose weight and have a stick thin body, but not P!nk. The singer is proud of her body and appears in the nude for Who magazine.

Silence the pregnancy rumors. Alecia Beth Moore Hart, better known as P!nk, has stripped down for the June 23 cover of Australia’s Who magazine’s body issue, and she has reason to be confident in her birthday suit: She looks great!

“I’m in the best shape of my life,” the mom-of-one revealed to the mag, which featured the singer on its cover looking toned and flaunting her collection of tattoos. 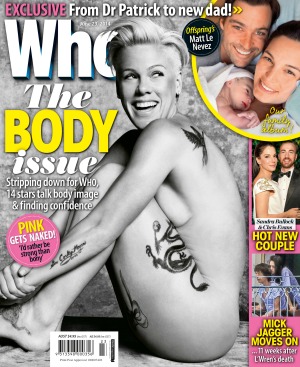 And despite being “ten pounds heavier” than she was before giving birth to her and husband Carey Hart’s 3-year-old daughter Willow, she’s not in a rush to shed the extra pounds and has confessed that she’s now “much more patient” with herself.

In fact, the singer is proud of her strong physique and the fact that she does not fit the stereotype in Hollywood, where a stick thin body is considered ideal.

P!nk reportedly pregnant with baby No. 2 >>

Instead of thinking, “Am I skinny?” I grew up thinking “Am I fast enough? How can I use my body?” the former gymnast said. “I’m a person who could always lose a couple [pounds] here and there, but I would rather be strong than bony.”

The 34-year-old singer’s confidence and positive body image is something she has already passed on to her young daughter.

“She said to me the other day, ‘Mama, on Tuesday I think we should get naked and have a naked booby butt dance party. I was like, ‘I’m in!'” the “Just Give Me a Reason” singer revealed.