Mike finds that life at Graceland has gone on without him in his absence, Briggs has settled into some semblance of adult life and with Jangles out of the picture and Caza laying low, there’s a storm brewing with a new cartel and a new case in the Season 2 premiere. 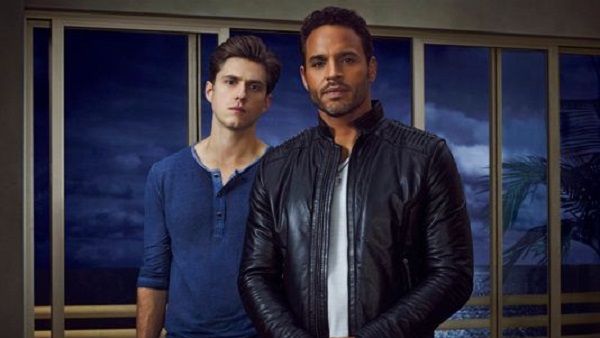 When we bid Graceland goodbye at the end of Season 1, things were looking bright for our crew. Mike Warren (Aaron Tveit) was moved off his undercover assignment, out of the house and into the cushy job at FBI headquarters he’d been gunning for since the pilot. Briggs (Daniel Sunjata) had his reputation restored, covered up his hand in Badillo’s murder and saw Jangles die right in front of him. There was one last big group bonfire on the beach and then came the business of settling into the happily-ever-after.

But in the words of Truman Capote, more tears are shed over answered prayers than unanswered ones, and Season 2’s premiere was no exception. What happens to a person who gets everything they’ve ever wanted?

They start wanting even more.

It turns out that the cushy job at FBI headquarters might not be the best fit for Mike. He’s antsy, constrained and fairly twitching to get back into the field. He’s craving the excitement. When he receives permission to run an operation tracking down drug smugglers who he believes are using passenger tourism buses to import heroin across the Mexican border, the whole thing is a bust, and he falls on his face. The failed operation of the famous Graceland “rock star” delights his fellow paper-pushing agents and his new lady love (farewell, Abby, we hardly knew ye, but we also hardly cared), but Mike can’t let it go. He’s trapped behind that desk he spent so long dreaming of, and he’s too proud to admit that maybe he needs to find a new dream. One that better suits the version of himself he’s become who can slip into an undercover persona and get comfortable in it.

Enter Briggs, who’s stumbled across some convincing evidence that the Caza cartel has put a hit out on Mike. On Mike’s undercover persona, rather, Mike the Marine, who helped Bello cut into a sizable chunk of Caza’s business last season. Since then, Briggs’ life has ended up in a pretty good place. He’s stopped the hard partying, he’s focused on his work and he’s finally settled into an official relationship with Charlie (Vanessa Ferlito). He’s clean, and he’s so much more mentally stable, but the allure of getting one more shot to take Caza down for good, well, that’s been Briggs’ dream for as long as the FBI has been Mike’s, and Briggs isn’t quite ready to surrender it entirely.

When Briggs calls to give Mike a shot at being the bait to lure Caza out, Mike dives on that phone call the way a drowning man dives on a life jacket. He’s thrilled to return to Graceland, even if it’s just for a long weekend, but upon his arrival, he’s stunned by the changes he sees: An on-the-wagon Briggs, a house that’s less inclined to take risks and a new roommate in the form of DEA agent Bates, who everybody seems a little more warm toward than they are to Mike. It’s not just that Mike feels replaced; it gives him a powerful need to prove himself to his old family, not just the suits back on the East Coast.

Graceland got under his skin and he hasn’t learned how to get it out. When he slips out of his suit and tie and back into being Mike the Marine, it’s the most comfortable he’s been all episode. His body language relaxes, he’s having more fun… but when Briggs’ contact double-crosses them and Briggs decides to call the operation off, Mike’s furious. He needs the win too desperately, his sense of control has been too rattled and he’s uncomfortable seeing how easily he’s been replaced inside the house and in the lives of his friends. He goes to higher channels, cutting Briggs out for permission to continue the operation.

It’s a marked sign of evolution from last year, when Briggs would have stuck to his guns come hell or high water. Last year, Briggs’ entire purpose for living was to pull Caza down and make them pay for the ways they’d ruined his life… and he got a little too close to the edge, nearly pulling Mike, Charlie and everyone else he loves over the cliff with him, all for that burning need for revenge.

This year, we’re dealing with a Briggs who has grown up, who’s learned there are some prices he’s no longer willing to pay. This is a Briggs who has learned how to let things go. He and Charlie are adorable together, he’s getting to a place where he can live with himself. He regrets calling Mike back to Graceland, but it’s too late now. They’ve switched places, and now Mike is the one digging his heels in and refusing to back down.

The new plan is a mess from the beginning, just as Briggs cautioned it would be, and it’s not long before Mike is hauled off, kidnapped and tortured. Between rounds with a plastic bag pulled over his head — a difficult scene to watch for those of us with asphyxiation issues — his tormentors continually ask him if he found the bus line. Turns out that Caza wasn’t the one that put the hit out on Marine Mike at all. This new cartel has it out for FBI Agent Mike, whose theory about the Mexican passenger buses was on the mark.

Once Briggs and Johnny have come to the rescue, it’s all the proof he needs to convince the assistant director that he should be in charge of a team on the ground rooting down the source of the bus line. Mike’s allowed to pick his own team… and the team he picks are all his former roommates at Graceland, who are pulled off their own cases and suddenly under his jurisdiction. If your friends won’t let you return to the fold, “go over their heads and become their new boss” is maybe not the greatest plan. Mike beams at the group as he announces that from now on, he gets to call all of the shots, and seems oblivious to their dark and obvious unanimous displeasure at this idea.

It’s an interesting angle to take with Briggs and Mike, this role reversal that somehow stays true to their basic personalities but emphasizes the ways the past year has molded them. Mike’s always had goals and ambitions, but he’s seldom been so brash and bullheaded, and Briggs has become a man who, more than anything, seems tired, as though he desires nothing more than a little bit of peace. It sets them up for another clash, but this time, it’s not opposite sides of a case they’re working; it’s opposing sets of priorities, and it should make for another season of sink-your-teeth-into-it enjoyable tension.