In the much-anticipated 22 Jump Street, Amber Stevens stars alongside Jonah Hill and Channing Tatum as Hill’s love interest, Maya. And after gabbing with the gorgeous actress about everything from hilarious outtakes to which co-star is the cuddliest, we’re convinced she’s living the dream. 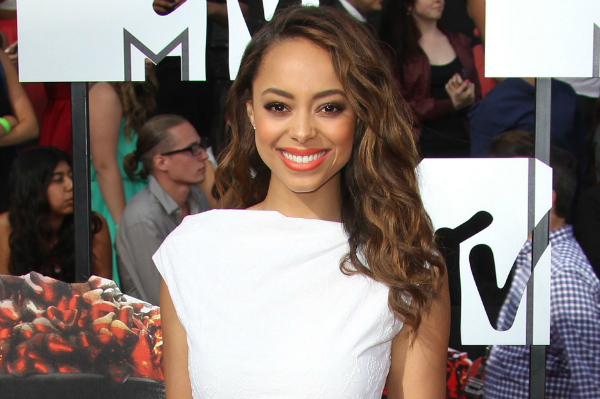 Two years ago, 21 Jump Street saw Jonah Hill and Channing Tatum as a pair of underachieving cops sent on an undercover assignment back to high school. Hilarity ensued, shenanigans were had and laughter was aplenty. Now, the fellas have returned, this time taking the guise of hard-partying college bros — complete with neon Wayfarers and muscle tees emblazoned with party mantras.

22 Jump Street, which hits theaters June 13, is every bit as funny and amusingly inappropriate — if not more so — than the first. And in what she calls a “great whirlwind,” stunning Amber Stevens landed the role of Hill’s love interest in the sequel.

It was a part she was “really stoked” to play, and one she credits Hill for getting, in a way. “I had to read with him twice before I got the part,” Stevens told us. “It was a funny scene where we’re meeting for the first time and kind of making fun of each other and stuff, and it was really fun. I think the fact that we had so much fun together in auditions is the reason I got to play the role.”

Of course, as is the nature of the industry, it wasn’t long after landing the part that Stevens and Hill had to cozy up for romantic scenes. When we pry about Hill’s kissing skills, asking her to rate him on a scale from 1 to 10, Stevens quickly tosses out “10” and a giggle, confessing that her co-star is pretty good at making out.

Still, despite Hill’s kissing prowess, Stevens admits that romantic scenes are inevitably awkward at first. Imagining Hill and Tatum making jokes behind the scenes and cracking everyone up, we asked her how many takes they needed before she and Hill nailed their make-out scenes.

“Four? I don’t know… probably more than that,” she laughed, revealing that capturing all of the necessary angles for the camera can be tricky, much like having the dreaded “first-kiss conversation.”

“The most awkward is the first kiss,” she elaborated. “‘Cause it’s like, ‘Are we gonna kiss in rehearsals, or are we gonna kiss the first time on camera? When do we kiss?’ You don’t ever want to have the talk with the other actor — it’s really weird — but once you do it, it just becomes like any other part of the scene. It may as well be kissing your own arm.”

For Stevens, one of the funniest moments during filming (and she confessed there were a ton) happened once she and Hill established that level of comfort… but their characters were in the midst of first-time awkwardness.

“Honestly, my favorite scene — I think my favorite day — was the shot where it’s the morning after the night we spent together. We have that awkward interaction in the morning, and then Jillian [Bell, who plays Mercedes] is sitting on the bed insulting him and insulting him and insulting him on how old he is. But when we were filming that, she had like 200 jokes up her sleeve,” Stevens said, “and it was so, so much fun to shoot that day, because they just let the cameras roll. They were just going at each other with insults, and I just got to sit back and watch. It was great.”

According to Stevens, being on set was virtually always a riot, just as we imagined it would be. And since her co-stars seem so genuinely down-to-earth, we can’t resist asking who’s the bigger teddy bear out of Tatum and Hill.

Her response? “Towards me, honestly, I would say Ice Cube!” she told us of the movie’s other main man. “To me, a teddy bear is someone who is just sweet and nice and just makes me feel calm. That’s how Ice Cube would make me feel.”

She emphasizes that Tatum and Hill have virtues of their own, of course.

“I don’t know that I would describe either Channing or Jonah as teddy bears, but both of them are really sweet in real life. But not, like, cuddly. Does that make sense? They’re just really fun. Channing really is, like, the nicest person on the planet. Yeah, he literally has everything — he’s got every box checked.”

So, since we know Tatum’s off the market, what would Stevens say about Hill if she were whipping up a dating profile for him?

“I would say he is hardworking, creative, he loves to have good conversations about music, and he loves his family,” she said, adding, “and he still has all his best friends from when he was a child, so his friendships mean a lot to him.”

Admittedly, we’re not just crushing on Tatum and Hill anymore — we’re kind of girl-crushin’ on Stevens now, too.

Not only has she been a great sport about our fawning over her hunky co-stars, but she also gamely opened up about everything from the nostalgic movie remake she’d love to be cast in (A Star is Born) to the possibility she’ll put out an album (“I love singing, but I would prefer to do musical theater”) to her penchant for reliving culinary indulgences like peanut butter bacon burgers on her blog (“I’m in New York! I went downstairs and got myself a latte and a full-fat croissant, ’cause that’s what I wanted”).

And while Stevens isn’t sure what the future holds for her, the adventurous actress is pretty much down for whatever. “Honestly, I’ll take anything that comes my way,” she jokes. “I just like to work.”