Catherine, Duchess of Cambridge put her hours in for The Firm today as she made two public appearances for the royals — but not everyone was thrilled to see her.

Kate spent the morning at the breakfast reception to launch the United Kingdom’s bid in the America’s Cup at the National Maritime Museum in Greenwich. Greeted by the usual crowds of admirers, one sweet little girl — the young daughter of three-time America’s Cup vet Matt Cornwell — was not impressed by Kate and her legendary glossy tresses, preferring to bury her face in her father’s shoulder than curtsy.

The group is trying to raise money and top-notch crew to finally win the race for the first time in its 132-year history — and Kate is the perfect person to bring them a little publicity.

“She’s a keen sailor, she loves her sailing clearly, you can just tell. You can see it in her eyes. It’s great for everybody she’s got behind it and [is] supporting it,” Lord Grade told The Mirror. 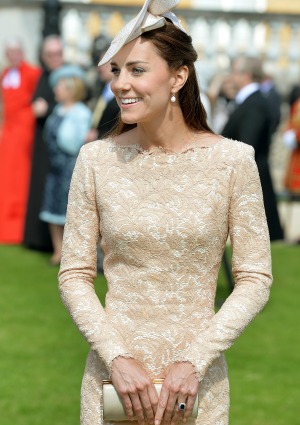 Later in the day, Kate joined the queen, Ann the Princess Royal and Princess Eugenie for a garden party on the grounds of Buckingham Palace to celebrate the 93rd birthday of her grandfather-in-law Prince Philip, Duke of Edinburgh.

Kate recycled a gold lace Alexander McQueen sheath for the occasion, last seen in 2012 at the Queen’s Jubilee service at St. Paul’s Cathedral.

Prince Philip, known for his off-color and often un-PC off-the-cuff remarks during public appearances, was himself born into the Greek and Danish royal families and wed his third cousin, the then-Princess Elizabeth, in 1947. He was given the title Duke of Edinburgh on the occasion of their marriage and made a prince of the U.K. by his wife — by then queen — in 1957. The couple has four children, eight grandchildren and four great-grandchildren, including Kate’s son, the future king Prince George.

Guests posted their personal snapshots of the duchess at the birthday celebration on Twitter.