Murder in the First is somewhere between The Social Network and True Detective, and while no new territory is covered in its premiere, the bones of a truly satisfying mystery are somewhere beneath the familiar tropes of a standard network cop show. 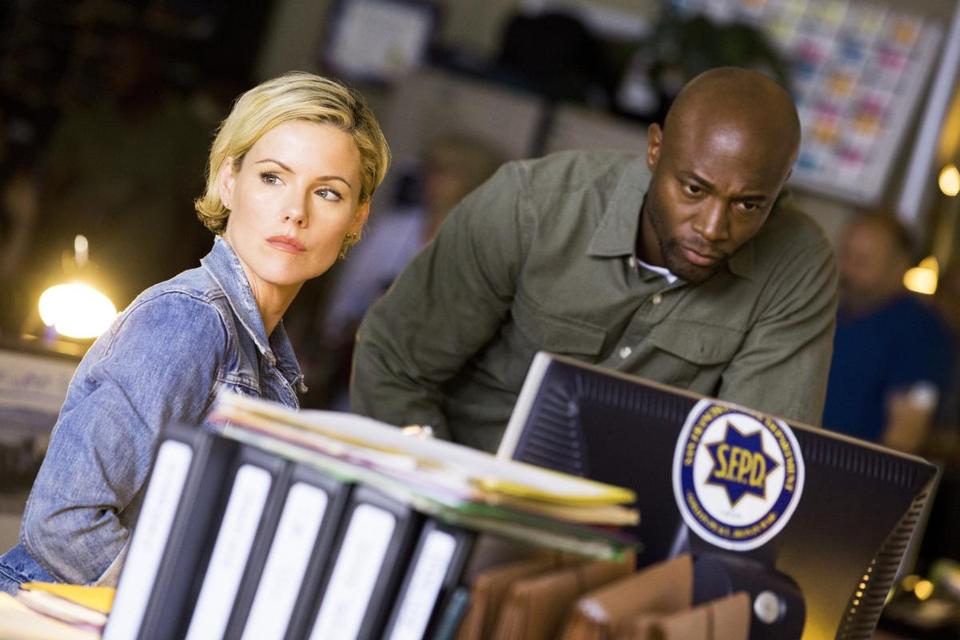 Breaking new ground with a cop show is a tall order at this point in television history, especially in the wake of HBO’s brilliant True Detective. Still, Murder in the First makes an admirable attempt to cover familiar territory, populate its world with familiar actors and also throw in some new twists and turns.

Detectives Terry English (Taye Diggs) and Hildy Mulligan (Kathleen Robertson) are partners working the beat in San Francisco, California. Mulligan’s a newly divorced single mom with an adorable daughter, and English has a wife who’s finally losing her battle with cancer. Their case of the moment brings Erich Blunt (Tom Felton), a whiz-kid billionaire who’s made a fortune off creating a new gaming system, across their paths. It seems that someone’s murdered Erich’s junkie biological father… and his former lover Cindy, a sweet flight attendant from his private plane who had the misfortune to catch Erich’s attention on a very bad day. The two murders are seemingly unrelated with Erich as the only real suspect. It’s not just a question of if he did it, it’s a question of if Mulligan and English can prove it.

Felton’s charming yet terrifying spoiled CEO is a particular delight, and Felton’s clearly having a lot of fun playing him. Erich is a vaguely Zuckerberg-esque figure with too much money, too much power and a giant mess of barely concealed rage issues to go right along with it. But does that necessarily mean he’s a murderer?

The show wants the viewer to believe both answers are equally possible. Erich has moments of incredible charisma, but when he turns angry, he boils over, whether he’s threatening death to a competitor mid-lawsuit or sliding his hands around Cindy’s neck in the middle of a kiss as though he means to choke her in the middle of an otherwise tender moment.

Diggs and Robertson also have the easy, lived-in chemistry of two partners who’ve worked together long enough to become genuine friends. When English has a breakdown in the middle of the office over his wife’s inevitable death, Mulligan’s tough but gentle straight talk telling him to go home and spend some time with her before it’s too late is a truly touching scene, and it’s evident that in that moment, she was the only person who could have possibly reached him. Mulligan is no-nonsense but compassionate at the same time, and she provides a sunnier background to English’s deep unhappiness to reflect back from.

Murder in the First is set to follow the True Detective model of exploring a single case and a single partnership over the course of a season, and the mystery that it’s laid out has the potential to be really satisfying. Granted, it would have been nice to see the show move in a different direction from the standard naked, murdered blond girl fare that’s populated crime shows for the past two decades, which has become tiresome and exploitative, but the linchpin murder that really kicked the series off was the death of Erich’s biological father, and it seems that equal attention will be given to both cases.

For fans of the serialized drama, it’s an entertaining hour of television. The only real stumbling block is the premise, one more cop show in a prime time lineup full of them, but it’s worth giving this one a chance to distinguish itself.

Will you be tuning in for next week’s episode? Murder in the First airs on TNT on Monday nights at 9/10c.