We’re excited to tell you that Mark Ballas’ new video “Get My Name” debuted on MTV and VH1 in the No. 1 spot. We sat down with the entertainer to get the inside scoop on what really makes him tick.

“I wrote the treatment for ‘Get My Name.’ I wanted it to feel classic but still modern,” Ballas said. “I wanted to tell a story and create a miniature musical movie, if you will, and include fierce, fun and eye-catching dancing. Classic jazz mixed in with classic hip-hop. I chose Derek to direct it. He’s just really awesome at seeing shots.”

2) He’s humbled to be compared to Justin Timberlake

“I try not to compare myself to other artists, but I’m a huge fan of JT. He’s obviously a legend. I’m very humbled, thank you,” Ballas told us.

3) His greatest fears growing up were wasps and heights

“If a wasp flies near me, I’m out of the room. I can’t do bees or wasps. I was also afraid of heights,” he said.

The dancer claims that his father would always try to get him to go on roller coasters, but he would scream bloody murder. “One time, my dad took me and my cousin Sal to Disney World. We got to the top of a really tall water slide, and you had to go down in pairs, and Sal was a bigger wuss than I was when it came to heights. We looked over the edge and we started to cry, both of us, saying, ‘We don’t want to do it!’ Then I remember my father said, ‘Daddy loves you,’ and he just pushed us down the slide. We flew down the slide, loved it and wanted to go again.”

4) When looking for a lady, he loves confidence

“Looks are important, but I love confidence. I come from a great Mexican family, and in my house, you need to have thick skin or you’re not going to get out alive. You’ve got to be tough, you’ve got to be fun and just own your personality. That, to me, is way hotter than anything.” 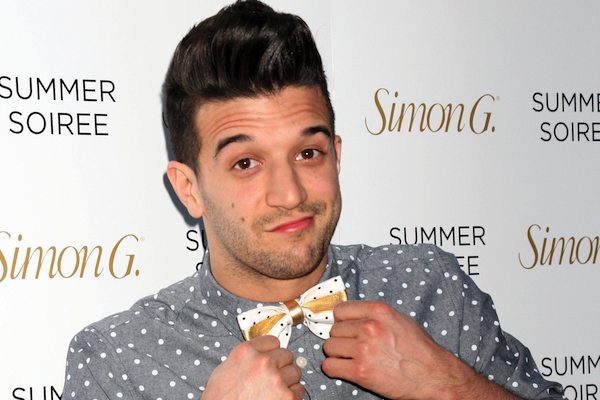 5)  His dream job, if he couldn’t be an entertainer, of course

“I’d be a professional soccer player or a UFC fighter.”

6) He has two celebrity crushes

Shakira sings like a goat and Ke$ha stalks Pitbull >>

“My dad bought me a Fender Stratocaster. I’ve had a lot of great gifts from my family, but that one was a life-changer.”

8) He has lots of tattoos

Ballas has a psalm tattooed on his ribcage, a voluptuous angel on his back, a full sleeve on his right arm with names of family members, cherry blossoms and a rainbow tree frog all tied together in a Japanese artistic style.

9) He spent a lot of his childhood in Japan

“My parents worked in Japan a lot, so I associate quality time with my family with being in Japan.”

10) The phone app he can’t live without: Pro Metronome

“If I’m on the show [DWTS] and the producers give me the tempo of a song and say, ‘oh, it’s the same tempo’ as another song and I know it’s not, I can prove it by playing the metronome next to it.” We like Ballas’ resourcefulness.