Welcome back to Litchfield for another season of make-outs, mayhem and even a little bit of attempted murder. 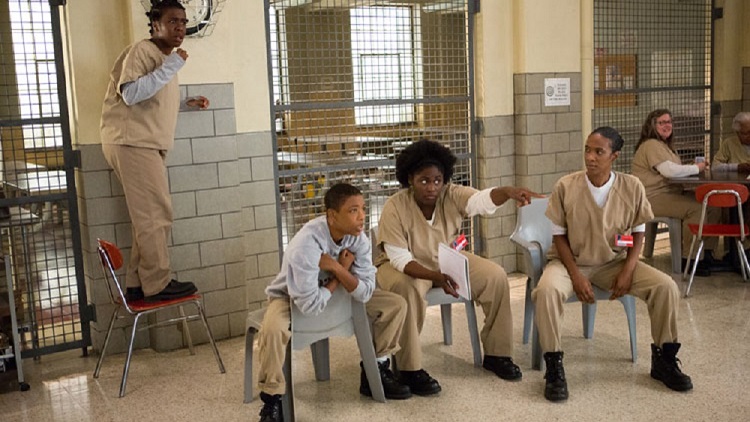 The theme of the second season of Orange Is the New Black was summed up succinctly by Cindy to her girls in the warehouse: mothers and daughters. How to be a parent, how to be a child, how to be both at the same time, how to be neither. This season, every inmate at Litchfield found herself struggling with the question of how to define a family, and the choices they made resulted in 13 hilarious but anxiety-inducing episodes of fantastic television.

We spent the first season getting to know the ins and the outs of Litchfield right along with Piper. We got comfortable. We thought we learned how it worked, and now that the show lured us into thinking we had everything figured out, Season 2 roared in to make sure we understood that actually, we know nothing. Characters’ backstories are more shocking, the level of corruption in the prison system is even worse than it was before and the relationships are even more complex — and a joy to watch tangle and unknot, over and over again.

The inevitable downside to watching a season of OITNB all at once is a little bit like eating an entire pint of Ben & Jerry’s. It feels fantastic until the slow realization creeps up that this is the last spoonful, and now there will be no more for a long, long time. The incredible sense of satisfaction, though — that’s the thing that lingers.

Until next June, here are the season’s highlights.

Orange Is the New Black Season 2: 5 Things we want to see >>

For a show that’s never exactly shied away from portraying the dehumanization of inmates in the prison system, “Thirsty Bird” set the bar with Piper (Taylor Schilling) taking an excruciating trip on ConAir. Never before has a show spent so much plot time on one woman’s desperate desire to go to the bathroom. We were cringing to see the way Piper had to plead with multiple guards to allow her the basic human dignity of using a toilet before one of them showed a scrap of decency. Not to mention the scene where she shivers in the back of a van, tears of terror pooling in her eyes as the guards chatter happily about Mila Kunis in a way that’s designed to be aggressive. It can’t possibly be legal to throw a woman in a van in the dead of night without telling her where she’s going or what will happen when she gets there, except in this world. The rush of relief when Piper is finally informed she’s been transferred just long enough to testify against Alex’s old drug kingpin and will then be returned to Litchfield is palpable enough to feel through the screen.

Bow down to Queen Vee

In the absence of Pornstache, Litchfield needed a new Big Bad, and Lorraine Toussaint’s deliciously amoral Vee stepped into those shoes with practiced ease. Vee arrived as a kind, motherly figure who had a long history with both Taystee (Danielle Brooks) and Red (Kate Mulgrew). Vee was the first person to show kindness and respect to Crazy Eyes, winning her eternal devotion, and her entreaties to rekindle her maternal relationship with Taystee started off sweet and heartfelt. She seemed to genuinely want to take Taystee and her friends under her wing, to create a happy prison family. But it became evident that Vee’s real plan was to play the long game, and any feelings she showed were purely calculated moves designed to bring her closer to her goal. Her real game? Channeling her heroin business into the prison with Taystee as her lieutenant, all played with a motherly smile and a giant pan full of cake.

Poussey (Samira Wiley) caught on to Vee’s game right from the start, and her desperation to save Taystee from Vee’s machinations were painful to watch. Her bewilderment that Taystee would ever choose someone else’s friendship over hers and her isolation from the rest of the group sent her deep into a bottle of home-brewed prison hooch and childish acts of retaliation. Even after Crazy Eyes physically assaulted her in the showers, she never gave up on her best friend, she never stopped fighting, and in the end, her faith was rewarded. Taystee realized that any love between herself and Vee was completely one-sided and chose Poussey, her real family. Good thing she brought a giant apology along with her. The joy on Poussey’s face when Taystee pulled her into a giant hug in the library was enough to bring tears to our eyes.

After leaving Piper to the mercy of a shank-wielding Pennsatucky in the Season 1 finale, Healey (Michael Harney) finally realized what an awful person he’d become. More impressively, he made incredible strides to be better this season. He took his job seriously again, pushing through Piper’s furlough request to see her dying grandmother and providing Pennsatucky with real counseling instead of being cursory and dismissive. He was more gentle with his wife, he tried to start a support group for the inmates and even began seeing a therapist himself. Perhaps most importantly, in spite of the major setbacks and self-doubt, in the end he rose above doing what was easy and bent the rules to correct a massive injustice that would have resulted in Crazy Eyes being punished for Vee’s crime. Sure, he’s got a ways to go when it comes to his near-obsessive fear of lesbians, but the fact that he’s realized he has a problem at all is a step in the right direction.

In possibly the biggest shock of the season, mild-mannered Lorna Morello (Yael Stone), who’s been constantly prattling about her gorgeous fiancé Christopher since the pilot, was revealed to have some massive mental problems. She wasn’t in jail for a mail-order scam as previously suspected; she was imprisoned for stalking the oft-mentioned Christopher, who, it turns out, was a man she only ever went on one date with. She constructed an elaborate fantasy about their relationship in her mind and turned angry and violent when Christopher had no plans to follow the script. Our jaws are still on the floor from Morello’s final attempt to contact him, which resulted in breaking into his house and taking a bath in his tub while wearing his real fiancée’s wedding veil. Her meltdown in Nichols’ arms when she finally realized how desperately she was in need of help was heartbreaking.

OITNB’s Laura Prepon on playing Alex: “She scares me a little bit” >>

The overall more hopeful tone of this season

While Orange Is the New Black is always hilarious, it’s oftentimes a hard, painful show to watch. The women are so utterly powerless to the guards’ whims and to the limits of the system. This season, however, our girls decided that they would all fight back for the things that mattered to them, no matter what the cost. Piper realized that Natalie Figueroa, the assistant warden, was at the root of all the internal problems and made it her personal mission to root out the corruption. Red redid her hair, polished her nails and set out to reclaim her family and her dignity. Yoga Jones joined new inmate Soso’s hunger strike with a trembling, nervous speech about how she couldn’t keep watching her friends get thrown into solitary as though it’s nothing worse than a time-out. Daya ordered Bennett to man up or get out of her life, and even Norma attempted to turn apple seeds into poison to pay Vee back for the brutal attack on Red. This season, every woman believed that she had the right to speak out and stand up, and it was inspiring to watch.

And while we’re speaking of inspiring things, Miss Rosa (Barbara Rosenblat) was a character we never thought we’d see get a backstory. Turns out she was once a beautiful, sexy bank robber with a wild streak a mile long, and to return to the present where she’s dying of ovarian cancer alone in prison was among the saddest moments of the season. In the most beautifully redemptive move of the series, however, Miss Rosa decided that she was not going to spend her final weeks of life stuck in a cell. During the lockdown after Vee’s escape in the final moments of the season finale, Morello gave her the opportunity to swipe the van, which she did with all the glee of her former gun-toting, fearless younger self. While last year the show ended on a terrifying cliff-hanger, this year gave us Rosa pressing the pedal to the floor and riding off in a flash of glory — after, of course, aiming the van directly at a newly escaped Vee, crashing into her remorselessly and musing to herself, “Always so rude, that one.” As far as exits go, we can’t imagine a more fitting one.

Season 2 of Orange Is the New Black is currently available to stream on Netflix.