Lzzy Hale took the country world by storm when she rocked the stage at the CMT Country Music Awards with Eric Church. Want to know more about the pretty rocker? Read on and get to know rock’s resident queen, y’all. 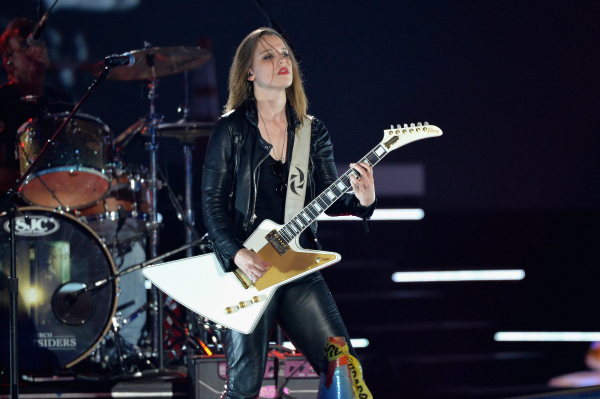 She fronts the hard-rock band Halestorm

It’s kind of a family affair, actually. Elizabeth “Lzzy” Hale and her brother Arejay’s history with music goes way back. Both siblings began playing piano at the tender age of 5. By the time Arejay was 10 and Lzzy was 13, the pair were already writing and performing their own original songs. And they aren’t the only family members with ties to Halestorm. In the early days of the band, their dad Roger played bass.

Did Jason Aldean bring his mistress to the CMT Music Awards? >>

And that band is kind of making history

Halestorm made history for the first time in 2012, when they became the very first female-fronted band to land on top of the active rock airplay chart for their song “Love Bites (So Do I).” Then, in February of 2013, they did it again when they became the first female-fronted band to be nominated and win a Grammy award for Best Hard Rock/Metal Performance for the same song.

The band has earned respect for their exhaustive touring schedule — seriously, it’s kind of insane. Lzzy and the guys perform up to 250 (yep, you read that right) shows a year. They’ve toured with some of the biggest names in the hard rock/heavy metal game, including Chevelle, Buckcherry, Shinedown, Seether, Staind and a ton more.

Jason Derulo at the CMT Music Awards: Love it or hate it? >>

Even if you didn’t know who she was when she sidled up to Eric Church at the CMT Music Awards and proceeded to rock everyone’s faces off, you knew two things for certain: she’s talented, and she’s gorgeous. In fact, Lzzy’s good looks were celebrated in the December 2008 issue of Revolver Magazine, along with Grace Perry, as the “Hottest Chicks in Metal.”

She’s been immortalized on Glee

You know you’ve made it when your song gets turned into a musical number on Glee, right? On February 21, 2012, “Here’s to Us” by Halestorm was performed on the “On My Way” episode. Performed by Lea Michele’s character, Rachel Berry, the song was part of the regionals competition segment of the popular show.

PHOTO: Dierks Bentley shows up “Drunk on a Plane” at CMT Music Awards >>

Have a question you need answered and you’d like the opinion of a total bada** chick who rules the rock world? Ask and you shall receive, my darling. Check out HardDrive XL with Lou Brutus. You might just get a chance to have your question answered on air during the “Ask Lzzy” segment.