Queen Elizabeth has an incredible new carriage containing no less than 1000 years of British history.

Queen Elizabeth arrived at the state opening of Parliament in style today, riding in a new carriage that celebrates 1000 years of British history.

The Diamond Jubilee state coach took 10 years to build and is only the second new carriage obtained by the royal family in the last century. Encrusted with jewels, including diamond-and-sapphire-covered door handles, the inside paneling contains slivers of wood from Captain Robert Falcon Scott’s Antarctic sled, Sir Isaac Newton’s apple tree, Hut Six at code-breaking center Bletchley Park, one of Sir Edmund Hillary’s Everest ladders and the beams of most of the commonwealth’s great cathedrals, as well as several royal residences dating back centuries.

Queen Elizabeth tells cops to keep their mitts off her nuts >> 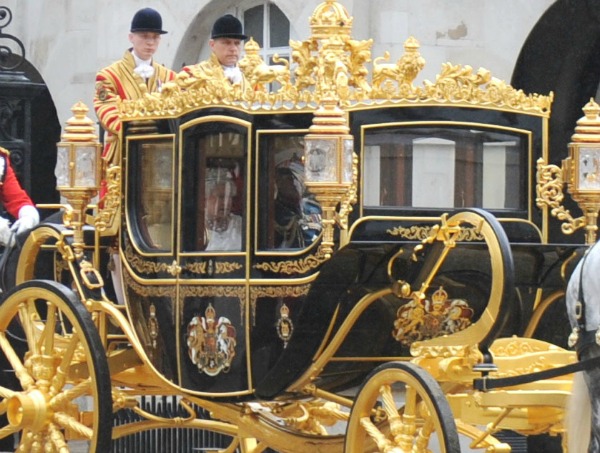 The queen will sit atop a piece of Scotland’s Stone of Destiny — upon which monarchs are traditionally crowned — and is surrounded by cultural wonders like a bolt from a World War II Spitfire aircraft and a musket ball from Waterloo.

Buckingham Palace intruder had a beef with the queen >> 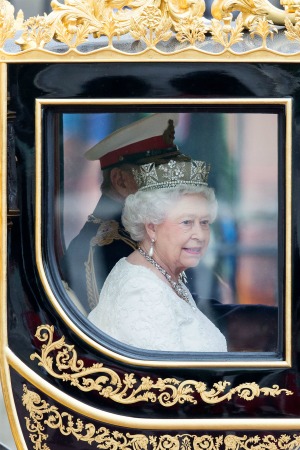 Capped with a crown made from the timbers of the HMS Victory, the lavish display also contains the royal website’s “coachcam,” giving a queen’s-eye view of the roadway.

“I wanted to make something in honor of Her Majesty’s great reign and something which represents our extraordinary history,” Australian coach maker Jim Frecklington told the Daily Mail. “I wanted something every family in the land can relate to.”

Before anyone cried foul that too much taxpayer money must have been wasted on such a lavish display of wealth, rest assured that not a penny came out of the public pocket. Frecklington paid most of the upfront costs himself, and the Royal Collection Trust procured it with funds from a private donation.