At just 18 years old, this lovely young actress has two comedic films under her belt. We sat down with her to find out if working with Melissa McCarthy is as fun as we think it is and what it’s like to have rocker Peter Frampton as her dad. 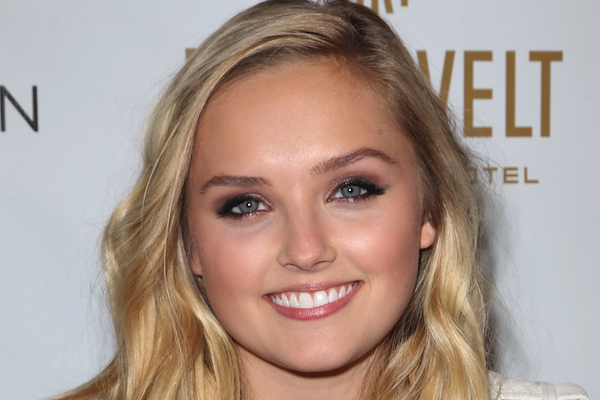 We asked Mia Rose Frampton to give us the scoop on her character, Karen, in the upcoming comedy Tammy.

“I can’t give too much away, because what makes the movie funny is the element of surprise,” she said. “But I can say that when Melissa McCarthy and Susan Sarandon‘s characters decide to go on a road trip, they meet me on the way, and I’m little bit more than they can handle.”

Frampton admits that her character in the film isn’t all that nice and that she “gets physical with Melissa, and that was a blast.”

She also told us that, despite appearing in Bridemaids, she never met McCarthy during shooting. When she auditioned for Tammy, “I finally got to meet her and her amazingly talented husband, Ben Falcone, the director,” Frampton said. “They were a dream team. They were super nice, and I got to improv, which was a dream come true because improv is my favorite kind of acting.”

When we asked Frampton what she learned from McCarthy, she told us that McCarthy never held anything back.

“She always said whatever came to her mind, and that’s what you need for improv. You can’t hold yourself back ever, because when you let yourself go and say the first thing that comes to your mind, that’s when you’re funniest,” said Frampton.

The Heat movie review: The Fed meets the fuzz >>

She also got to act on-screen with Sarandon, who had an interesting technique for playing drunk. “So she was spinning and spinning around to get into that drunken state. It was amazing to watch her get into character. I just hope some of her wisdom and experience will rub off on me.”

Mia Rose’s father is British rocker Peter Frampton. His performance ability has clearly rubbed off on her, but in unexpected ways.

“When I was growing up, I never sort of realized what sort of figure he was in music. I just remember him taking me out on stage one day when I was really little. It’s one of my first memories. I thought, what are all these people doing here?”

She says the “Baby, I Love Your Way” singer loves to tell corny jokes and embarrass her, just like any other dad.

“When I was little, we’d go to the gas station and while he was pumping gas, he’d come up to the window and pretend he was in an elevator, going down below the window. Or he’d pretend he was going down steps. He would just do the silliest things. That’s where I get my silliness.”

But he also introduced her to music. “I learned how to play my first song on the guitar from him. He taught me how to play ‘Blackbird,'” she said.

Ms. Frampton’s next adventure will be heading off to college in Southern California, where she’ll study film and, hopefully, keep auditioning for movie roles.