Chicago artist and writer Ben Shepard thinks Kanye West should be mayor of the Windy City. We would not want to be West’s campaign manager (talk about a tough sell), and here’s why.

While some may argue that having poor judgment defines what it means to be a politician, we’d argue it makes you an infamous politician but not a good one. Kanye West has exhibited poor judgment, well, pretty much every time he opens his mouth, but more specifically by becoming a member of the Kardashian juggernaut. That clan has an expiration date we suspect is rapidly approaching, and all the Kardashians and West are going to be left with is a stack of dusty Vogue magazines with West and bride Kim on the cover. Think we’re being unfair when we say West has poor judgment? Watch this (NSFW) “Bound 2” video again. The one redeeming quality of this song is the Milli Vanilli-sounding voice-over.

Kanye West rant: What did Kim do wrong in her last life? >>

Lord have mercy, West has a big mouth. His real talent is angering the masses every time he opens his mouth. West has said so many outrageous things that it’s hard to catalog them all — but the underlying theme is he’s the most influential person of his time, he’s a victim and Kim has Barbara Walters calling her every day. It’s true that politicians have to be skilled orators, but they also have to say what the people want to hear, not something that makes them insane with anger.

Politicians have to be a patient bunch as getting anything done in the way of policy takes for-ev-er. West has an impressive track record that proves his fuse is incredibly short. Whether he’s tackling photogs at LAX or punching 18-year-olds in the face, it’s become abundantly clear that West doesn’t know how to use his words — on any level.

Someone with a profound god complex, which the self-named Yeezus has, can’t govern the people. God is supreme ruler, which is evidently what Yeezus thinks he has in common with the “big guy upstairs.” West’s divine ways leave little room for debate and democracy. 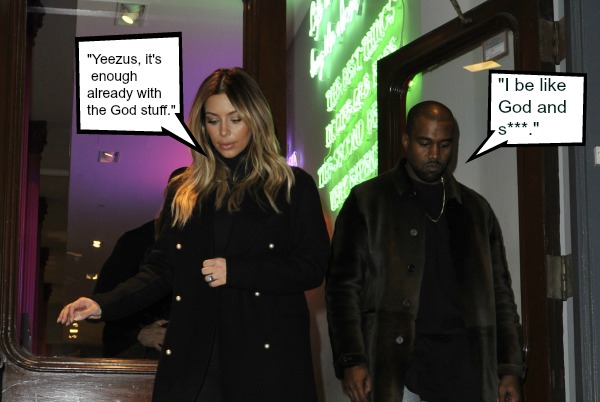 Thinking you are the second coming of Jesus, but with a new name, goes hand in hand with being a narcissist. West, with his lovely new bride on his arm, thinks he is the final authority on pop culture. Like any good narcissist, West has absolutely no self-awareness. He believes if he says it, it must be true. It’s difficult to be “of the people” and “for the people” when you forget that there are other people.