Say it isn’t so. Our beloved Alice (Ann B. Davis), the housekeeper from the iconic ’70s classic TV show The Brady Bunch, has gone to that big kitchen in the sky. While growing up, a generation of kids wished they had an Alice roaming around their house. Here’s why. 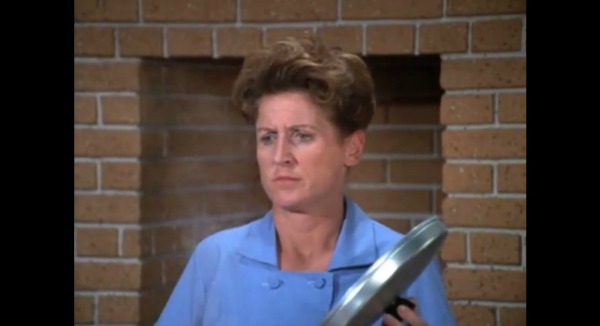 One of the most hilarious but rarely discussed oddities of The Brady Bunch is that Mrs. Brady was a full-time, stay-at-home mom with live-in help. Sure, Mrs. Brady had six kids, but by the time Mr. and Mrs. Brady got together, all of those kids were old enough to dress themselves, eat and use the bathroom without assistance. Alice ran The Brady Bunch house like a well-oiled machine. The most we really ever saw Mrs. Brady do was look good, crack a couple of eggs and boss Alice around.

Those Brady kids left their laundry everywhere, and they were constantly eating. Alice never had a moment’s rest. Mrs. Brady got exhausted watching Alice do all of the domestic chores that came from having nine people live under the same roof. Although, one of the Brady kids’ favorite sayings was, “Alice is gonna kill ya,” and while Alice was often caught muttering, “I’m gonna kill ’em,” she never actually murdered any of the Brady kids.

What that woman wouldn’t do for the Brady bunch! She lived with them and had little social life outside of a long-term relationship with the mysterious and non-committal “Sam.” Alice was forever assisting the kids with whatever they needed help with when Mrs. Brady was off doing whatever it was Mrs. Brady did all day. This clip is a perfect example of her untiring commitment to the Brady kids. For a school project, Jan wraps Alice up like a mummy while Marcia sits on her duff making wisecracks. Then the girls leave! Let the hilarity ensue.

She was full of advice

Mr. Brady couldn’t always be at home to offer pearls of sage wisdom at every single opportunity, and sometimes Mrs. Brady was too busy leaving the house with her purse over her arm (though we never really knew where she went). That left Alice to dole out advice to six budding adults. What we loved about Alice’s advice was that it was brief and useful — two things Mr. Brady’s advice never was.

Oh, Alice! Those two words were at least 50 percent of Carol Brady’s dialogue. That Alice — she was something wasn’t she? She could make a pot of spaghetti like none other and still have time for a quick pun, a guffaw or a one-liner. Wouldn’t all of our lives have been a bit better if our childhoods had an Alice in it?