Born in Montreal and raised in Toronto by her Moroccan parents, Emmanuelle Chriqui has been in LA for the past 15 years and is taking the film and TV world by storm. We sat down to chat with her about her upcoming projects, including the Entourage movie. 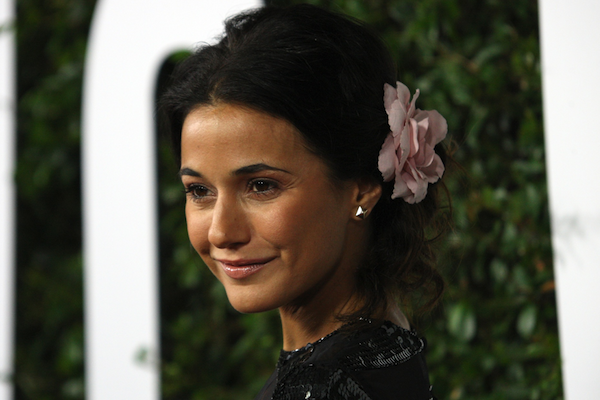 The film, A Short History of Decay, centers on a writer named Nathan who gets dumped in the opening scene by his over-ambitious girlfriend, played by Chriqui. We asked the actress to tell us about her super-zealous character.

“Erika is a writer and we meet her at a point where she’s ending things with Nathan (Bryan Greenberg, Friends with Benefits) because she’s had it with him. She’s had it watching him struggle and being in a rut. Erika is an incredibly ambitious writer. She comes off a bit abrasive and she’s lost in that over-ambitious land that I think happens to some people.

“She ends up being the catalyst for Brian’s character to really take a look at his life and deal with himself and really look at what’s important and not to live under a rock anymore. That’s what she’s there for.”

It turns out that Greenberg and Chriqui are very good friends offscreen.

“We’ve known each other for years. We met on his show Unscripted for HBO, way back when. We’ve been friends ever since. Getting to work with a close friend is always amazing,” said Chriqui.

Of course, we had to ask her about the upcoming Entourage film, based on the TV show, but the tight-lipped actress couldn’t say too much for fear of giving the plot away.

“Let’s just say that for anyone who’s familiar with the TV show, it picks up from where we ended. It’s very true to the series.”

We asked if there’ll be wedding bells for any of the characters. “There is a wedding, but I can’t say whose,” she confessed.

One detail from the movie set she did share with us was Eric’s (Kevin Connolly) broken leg — yikes!

“During the movie, Kevin Connolly broke his leg shooting the football scene. It was one of the days we had a star football player, Russell Wilson, on the set. Kevin broke his leg and he was in a cast after that and it’s still mending.”

Oh, poor Kevin! Luckily, they shot around his cast, mostly showing him from the waist up.

We asked Chriqui what other projects she has coming up.

“I have my web series coming out. It’s called Cleaners, it’s on Crackle for Sony. It stars Emily Osment [sister of The Sixth Sense‘s Haley Joel Osment], David Arquette and Gina Gershon. Emily and myself play two bada** assassins wreaking havoc, it’s super-fun and I’m also an executive producer so it was a bit of a passion project as well.”

That does sound awesome, but we wanted to know what Chriqui’s dream job would be.

“My dream is to get on an incredible cable show. That’s just the truth, that’s what I watch. My favorite shows have been True Detective, Ray Donovan and Sons of Anarchy. These shows where the women are so amazingly written — I would love to have a cable show I could tear to pieces. In my off time, I’d love to go shoot some films in France.”

Is Jessica Chastain going to be on True Detective? >>

We asked Chriqui if we’ll be seeing her back on HBO anytime soon.

“That would be nice; they make great television. I love working with them, so we’ll see.”

A Short History of Decay is out in theaters in limited release and will be available on DVD June 10.