The royals are really letting loose this week: Prince Harry gave us a glimpse of those hot ginge abs while Will and Kate guzzled booze in Scotland.

Our favorite royals look like they’ve had a super fun week! Prince William and Catherine, Duchess of Cambridge hit up Scotland, where they were greeted by throngs of royal watchers, while Prince Harry had as much fun as one can have with one’s clothes on playing rugby with a bunch of kids in Suffolk.

Will and Kate — also known as the Earl and Countess of Strathearn — spent the day in Strathearn, Perth and Kinross and along the way visited a couple of whiskey distilleries. Kate, who usually demurs from drinking in public, is starting to loosen up!

The couple first stopped by Scotland’s oldest distillery, Glenturret, where she sampled not one but three different blends. She later imbibed in some gin from the Strathearn Distillery while making an appearance at the Forteviot Fete, telling organizers, “It’s delicious [but] I had better not drink too much because of all the whisky I drank at Glenturret.” 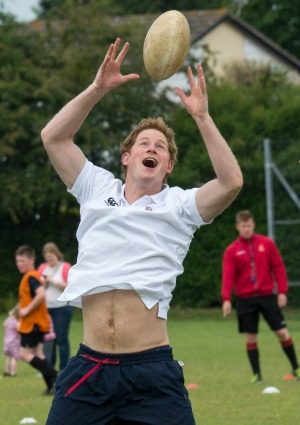 Meanwhile, our favorite party prince and newly single Harry showed some skin during a day of appearances in Suffolk, England, but in a much more innocent way than those infamous Vegas photos.

And it was during this pickup game that we spotted them: The royal abs.

Of course, Harry isn’t the only royal to show off his stellar physique in a very public way. Upskirt shots aside, Kate made millions of moms gasp when she inadvertently showed off her perfectly toned tummy while playing volleyball at one of her first appearances after the birth of Prince George.

Harry also marked the 100th anniversary of the outbreak of World War I and said during a speech, “One hundred years on we remember our forebears who gave their lives for us, we should remember those gallant men of Suffolk, who, in the first few months of that war, saved the British Army from destruction at Le Cateau.”