We love Seth MacFarlane, but with several animated TV series and two films under his director’s belt, we think it may be time for the actor/writer/director to evolve his funny beyond his penis. 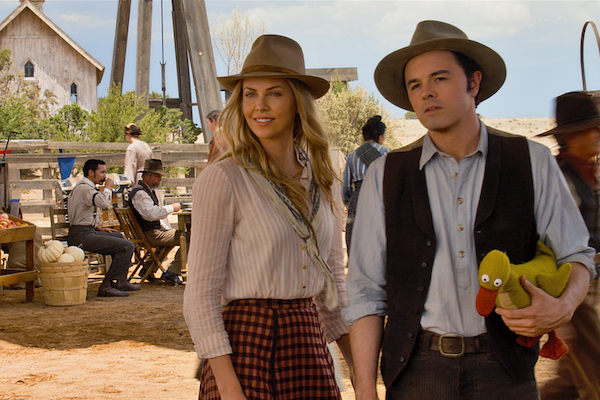 There isn’t much not to like about Seth MacFarlane. He’s funny and charming, not to mention tall, dark and deliciously handsome. The 2012 movie Ted with Mark Wahlberg made us laugh out loud. MacFarlane’s a guy with a lot of great ideas and manages to execute most of them very well. So what’s troubling us about A Million Ways to Die in the West? Let’s start with the million ways MacFarlane makes penis jokes.

Men, especially young men, love to crack jokes about their member. MacFarlane is no different and his jokes about genitalia are generally funny. For about the first 30 minutes. While the film sets up many comedic situations, such as the romance between Edward (Giovanni Ribisi), an average joe, and Ruth (Sarah Silverman), a prostitute, it doesn’t take the characters into new territory. 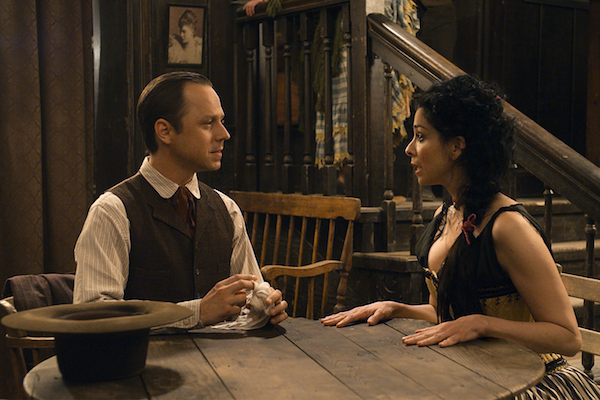 MacFarlane and Charlize Theron‘s characters find themselves in a similarly simplistic situation. As we get to know Albert, the lowly sheep herder, and Anna, the bad-a** gunslinger, they never quite feel like real people we might have met in the 1880s. Instead, they feel more like the cartoon characters we’ve seen on Family Guy.

We know MacFarlane wanted to keep a modern vibe in this movie, but isn’t it more fun to explore the Wild West for what it truly was — a harsh, difficult time of lawlessness and hard living where the smallest of comforts made a person’s life worth all the hardships? Couldn’t Albert and Anna have found plenty of humor struggling to survive together instead of making goofy sexual innuendos only middle-schoolers would find funny? 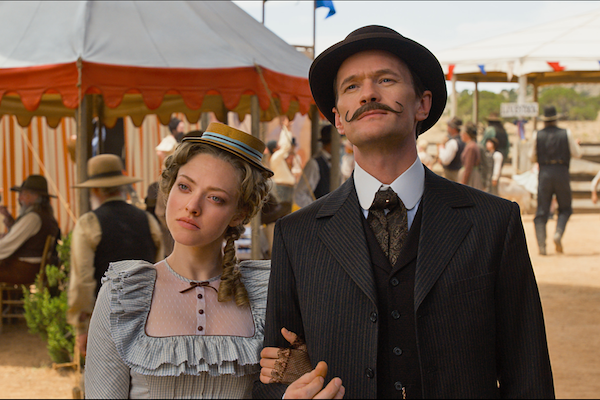 That said, there is still much to like in the film. Particularly, Neil Patrick Harris and Amanda Seyfried‘s characters, Foy and Louise. Harris is terrific with physical comedy and makes the scene where he’s having diarrhea during a gunfight absolutely hilarious.

Seyfried is at her best when she’s using self-deprecating humor and poking fun at her giant, doe eyes. It’s great to see the usually dramatic actress kick up her heels a bit.

The best thing in the movie by far is the “If You’ve Only Got a Moustache” song and dance. This is truly fun humor that allows the movie some real comedic legs and doesn’t rely on poop or farts. This is what we want to see more of in your upcoming movies, Seth. We know you can do it!

A Million Ways to Die in the West opens in theaters today.