In addition to making us laugh our heads off each week, Modern Family challenges us to rethink the definition of the nuclear unit. And when it comes to gay families, we’re learning a lot from the mockumentary’s adorable couple Mitchell and Cameron. 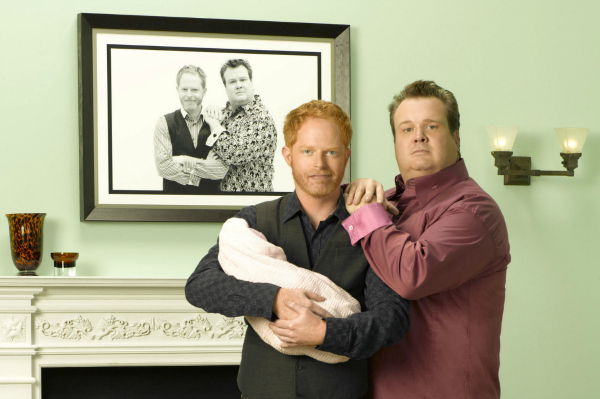 They have the same gripes and growing pains as others.

As arguably the funniest family on television, Mitchell, Cam and their adopted Vietnamese daughter Lily have no shortage of hilarious family hiccups. And while the players may be different — two men instead of a woman and a man — the arguments are essentially the same. “Cameron has it in his head that I don’t listen to him, but I do,” Mitchell says in the same episode that Jay tells the confessional, “You can’t have a successful marriage without being a good listener.” Looking at his computer while trying to pull together a last-minute musical miracle for Cam, Mitchell gripes, “Sometimes it takes a lot of work.” Yep, could easily come out of our mouths… and probably has.

Still, they understand they are different.

Mitchell and Cam are realistic and, at times, insecure, about the reality that their family is inherently different from the traditional nuclear family. When the guys adopted Lily, Mitchell was terrified to tell his family. Cam may have been, too, but he decided not to let his nerves interfere with announcing baby Lily in style — The Lion King style, that is. Later, in the insanely funny episode in which Cam is convinced Lily should star in a commercial, Mitchell isn’t so sure, lamenting, “Let’s just let Lily have a normal childhood.” To which Cam quips, “I think that gay cruise has sailed.”

Sure, Mitchell and Cam have some cringe-worthy parenting moments. Seriously, though, don’t we all? My kid tried to eat a bar of soap last week. But no one can argue that these two are terrific parents — they love Lily fiercely. “I’m like a mother bear,” Cameron asserts in an episode. “When I hear my cub crying, I have to run to her.” You don’t have to be a woman to provide a child that kind of love. Mitchell and Cam consciously chose to be parents and tried very hard to become parents. Therefore, they are extremely committed to being great ones.

They love each other enough to jump all the hurdles.

Every family at some point hits a speed bump on the road to happily ever after. Gay families? Well, they hit them a lot. The important thing to note, however, is that they keep on trucking. When Cam decides to tell his crotchety ultra-conservative grandmother he’s gay and planning to marry a man, he knows he might lose his family. His love for Mitch prevails, though. “After the initial shock, Gram softened a bit,” Cam reveals. “She even agreed to attend the wedding.” Although Mitchell is quick to point out, “Standing outside with a gun.”

The two were naturally overjoyed when same-sex marriage became legal in California, setting off a series of situations in which they try to one-up each other in the proposal department. Ultimately, they both end up on one knee while stuck on the side of the road and trying to change a flat tire. After Mitchell muses, “This is not at all how I saw the evening going,” the couple reminisces about all of the other hurdles they’ve had to overcome that brought them to that point.

Granted, we can’t say they’re just like the rest of us. Why? Because they aren’t. Gay families endure so many things the average hetero family can’t imagine to be able to be together. But in so many ways, they’re no different from everyone else. They’re not perfect — they argue over silly things and stress out over nearly everything involving their child. They love each other. Deeply. They laugh at each other’s corny jokes sometimes and, other times, they roll their eyes. Most important though, they’re a team. When their dreams of adopting another baby are at first dashed, Mitchell breaks down and runs off into a field. Cam gives chase, and the couple winds up lying on the ground together, holding hands. “I think I’m lying on a rock,” Mitchell observes, to which Cam responds, “I’m lying next to my rock.”