Give a glance to this intriguing poster that may reveal some precious secrets about Katie Holmes’ role in this psychologically explosive new film about the true nature of human society.

The mind-blowing story of The Giver focuses on Jonas (Brenton Thwaites), a young man who lives a seemingly perfect life in a world where no one ever suffers. When he’s assigned to be the Receiver of Memory, however, he begins to discover the truth behind his so-called pain-free society and starts to question everything. The film is based on Lois Lowry’s award-winning young adult novel of the same name and has sold more than 10 million copies worldwide.

In the new film, actress Katie Holmes takes on the role as Jonas’ Mother and is married to Jonas’ Father (Alexander Skarsgård). When a movie has numerous intriguing characters, the filmmakers often release an exclusive poster for each one. The Giver is no different.

Today, we’re excited to share Jonas’ Mother’s character poster with you, as one of seven that are being revealed on the internet today at sites such as MTV, Fandango, Teen.com, The Huffington Post and Yahoo! Movies. 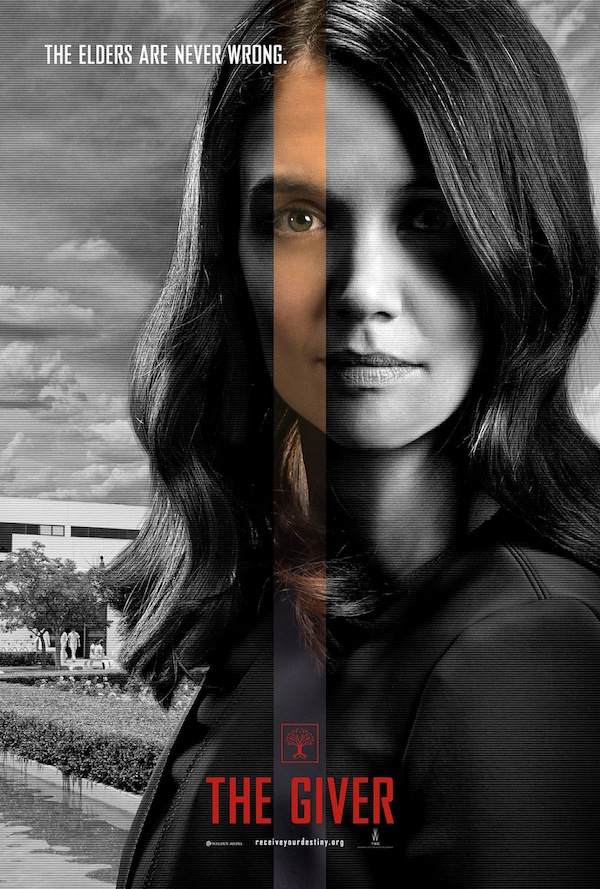 While this poster featuring Holmes appears deceptively simple, we encourage you to take a closer look. The first thing that struck us was the primary use of black and white and the single stripe of color placed over her right eye, her only visible eye.

We can’t help but wonder if the specific color placement means her character sees through the faded lies her secretly dystopian society is telling her? Does she have an awareness and knowledge that the others in her family do not?

The tag line at the top of the poster reads, “The elders are never wrong.” The “g” in wrong is carefully placed inside the color stripe. Does that suggest a duality in the meaning of wrong? Perhaps, implying that the elders may, in fact, be wrong sometimes?

Behind Holmes, in the distance, is a cloudy sky and what appears to be some type of institution, ironically reminding us of Holmes’ flee from the Church of Scientology after her divorce from Tom Cruise. Is Holmes trying to send a message about religious institutions in general? Or are we just reaching here?

There’s also a man-made pool of water below the institution. Could this be some kind of reflecting pool, encouraging all those who see it to reflect on their own inner selves?

Tell us what you think the poster means in the comments section below.

The Giver opens in theaters on Aug. 15.

Click here to see more character posters from The Giver >>