Drew Barrymore introduced her new baby girl Frankie to the world, and reveals the life she wants to provide for both of her daughters.

Drew Barrymore’s childhood was not exactly idyllic: While she was one of the most successful child actors of her time, her home life was less than ideal. Now that she is a mom herself, she plans to provide the exact opposite for her own children: total emotional safety. 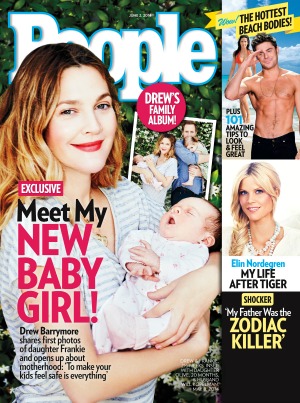 The Blended star introduced new daughter Frankie in the latest issue of People, and in the accompanying interview said that she wants to give both of her daughters the things she didn’t have herself as a child.

Barrymore said she wanted oldest daughter Olive “to have a sibling, because I really would have liked that in my life.

“And always being on time, being there when I say I’m going to be there. Creating a real stable home. I know when my daughter wants to swing higher and jump into the pool and all of these things, she feels safe. To make your kids feel safe is everything.

“Olive loves Frankie and just wants to hang out with her all the time,” she added. “She wants to feed her. She’s super into it. That’s now. I’m sure things will ebb and flow.”

Drew Barrymore finally has the family she always wanted >>

As far as hopping back into her career goes, Barrymore said Adam Sandler was instrumental in creating the perfect family-oriented work environment.

“I didn’t think I could go back to work, honestly. I didn’t want to be away from my kids and it just wasn’t the priority,” she said. “With Adam, he makes everything really safe because he really creates an environment where kids can come and be a part of it. It was a really big lesson for me.”