Jack White is a big fan of a few pop stars you probably wouldn’t have expected. The rocker has opened up to Rolling Stone about the greatest concert he’s ever been to, as well as about that time he worked with Jay Z.

Jack White’s musical taste apparently runs the gamut from rock to rap. As the world awaits the release of his new album, Lazaretto, the musician has revealed to Rolling Stone which of his peers he admires and what pisses him off while performing. 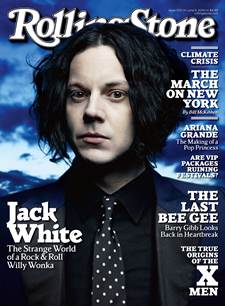 Covering the magazine’s latest issue, available in print and to download Friday, the 38-year-old described Daft Punk as “amazing” while explaining there’s a special place in his heart for Kanye West.

Recalling his visit to one of the future Mr. Kim Kardashian‘s Yeezus concerts, White stated, “That might have been the greatest show I’ve seen in my life. It was more punk, more in-your-face than anything I’ve seen.”

Another big name the guitarist has worked with you might not have expected to hear about is Jay Z, and White claims there are several tracks out there the two collaborated on previously.

Why haven’t we heard them yet? The father of two said only, “I’m not sure he liked them.”

Jack White starts a catfight with a female pop star >>

Venting a bit about concertgoers in general, White went on to say, “People can’t clap anymore, because they’ve got a f***ing texting thing in their f***ing hand, and probably a drink, too!

“Some musicians don’t care about this stuff, but I let the crowd tell me what to do. There’s no set list. I’m not just saying the same things I said in Cleveland last night. If they can’t give me that energy back? Maybe I’m wasting my time.”

Despite the foul-mouthed rant, the divorced star claims to have a people-pleasing side, sharing that if he’s in a social situation where someone’s joke bombs, he’ll “be the only one to laugh, just to ease the tension in the room.”

Check out more from Jack White over at Rolling Stone, while Lazaretto is due out June 10.