The Bachelorette is back, and now we get to watch accomplished cutie Andi Dorfman (who told Juan Pablo to his face what a d-bag he is) find love. Now that the premiere has aired, we are hearing lots of juicy gossip, which we have organized all in one place for you. Enjoy. 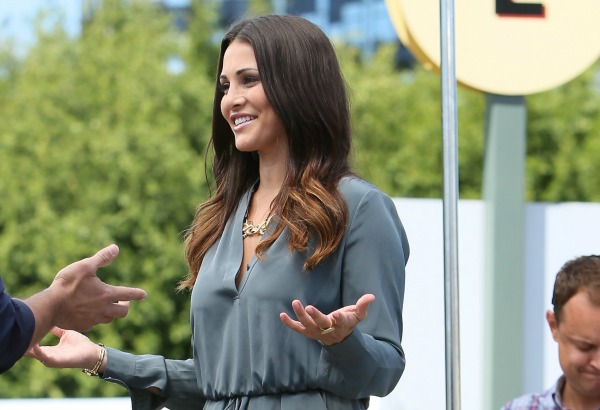 Season 8 contestant of The Bachelorette, Chris Bukowski, showed up to the latest The Bachelorette premiere unannounced, hoping to get some face time with Andi Dorfman. While he was made to look like a Stage 5 stalker who wouldn’t leave, Bukowski is crying foul. He told TMZ that the show’s producers knew all along and encouraged the stunt. Bukowski told TMZ, “They made it seem like they didn’t know I was coming, but they knew.” Wait. The producers of a reality television show schemed and scripted something that has nothing to do with reality? Wow. Color us surprised.

Jason Biggs, American Pie alum, loves throwing shade on the contestants of the The Bachelor franchise, but after the premiere he offended fans, non-fans — pretty much everyone — by taking cheap shots at deceased contestant Eric Hill. Biggs tweeted, “Crazy rule change — instead of voting off the contestants, this season #TheBachelorette gets to kill them off.” He ended an inappropriate follow-up tweet with #TooSoon, to which everyone responded, #Der.

Just when we thought last season’s Bachelor, Juan Pablo, had faded away into the tacky underworld of promotional pool parties in Las Vegas, he reared his tool-bag head on Facebook. He couldn’t just let the premiere go and be happy that there are two of his 15 minutes of fame left on the clock. He had to hop on Facebook and yammer on about how lucky Dorfman was to be a friend of Nikki’s so that she could avail herself of JP’s infinite pearls of contract wisdom. Please.

He also called others who had done the show “puppets” (is he referring to our beloved Sean Lowe who spent last season’s The Bachelor reunion show rolling his eyes at Juan Pablo?). Juan Pablo’s thinly veiled attempt at sarcasm didn’t stop there — he went on to say he wouldn’t be watching the show. That bit of information is sure to keep Dorfman up at night. Oh! Don’t look now, but JP’s Facebook rant fell into the “Who gives a s***?” file! Oops.

INTERVIEW: Could host Chris Harrison be the next Bachelor? >>

Dorfman says being the Bachelorette isn’t as glamorous as it seems. In a recent interview, she laments, “It’s tough to say ‘no’ to people. It’s tough to feel responsible for 25 guys and know what they have done to get to where they are and put themselves on the line and be, you know, respectful of that and it’s hard. It’s very hard to hurt people, especially when they’re great, genuine guys.” So being fawned over by two dozen hotties and guzzling Champagne does have a dark side (we always wondered). At a minimum, Dorfman will be a pro at breaking up when the show is over because she’ll have more than her fair share of experience in stomping out the hopes and dreams of multiple men.