While doing a shoot with GQ, Channing Tatum revealed his “Tittles” nickname and gave away Jonah Hill’s worst habit before taking off with half the shoot’s designer clothes.

Channing Tatum took a break from his hot GQ magazine shoot fitting to reveal a funny nickname and give away costar Jonah Hill‘s worst habit ever.

Before starting his shoot for the famed men’s magazine, Tatum did a behind-the-scenes video that was titled “Inquiries of Gentle Men with Channing Tittles,” aptly named after his revealed nickname. In the clip, Tatum quickly answers questions while packing up the clothes from the shoot so he can take them before someone catches him.

“What’s Jonah Hill’s worst habit?” an unseen interviewer asks after Tatum grabs a handful of belts. “Being f***ing funny all the time.” 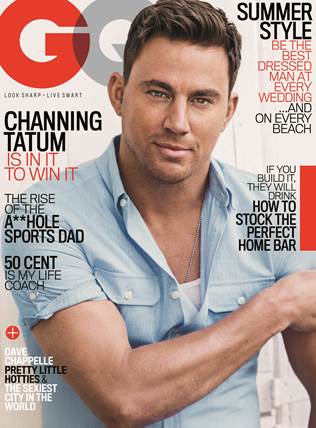 Tatum goes on taking belts, scarves and hats as he keeps answering questions such as first thing he reaches for in the morning (“baby monitor”) and favorite breakfast food (“Scrambies”). Then, when asked if kids made fun of his name growing up, he said they called him things like, “tatum pole, tater tot, and tittles.”

Tatum would like to be Time Man if he could be a superhero and explained what “Donald Ducking” means (waking up wearing only a shirt and boots after drinking all night). He doesn’t get anything about female fashion and feels like he has to eat “f***ing broccoli” because it’s good for him.

In the beginning of the video, Tatum asks GQ’s creative director Jim Moore if he can take some of the shoot’s outfits. But, after being told no, the actor keeps insisting. “Just these?” the 22 Jump Street star asked again while holding up a pair of ridiculous shorts.

“I don’t think you’re going to wear those,” Moore says, and Tatum tries again, saying he is starting a new trend. “Put the shorts down,” Moore says as he goes out the door.

Check out the super-funny clip in the video below.