We chatted with the actress who plays Rose Hathaway, a Dhampir, or creature that is half-human and half-vampire, just in time for the film’s DVD release. 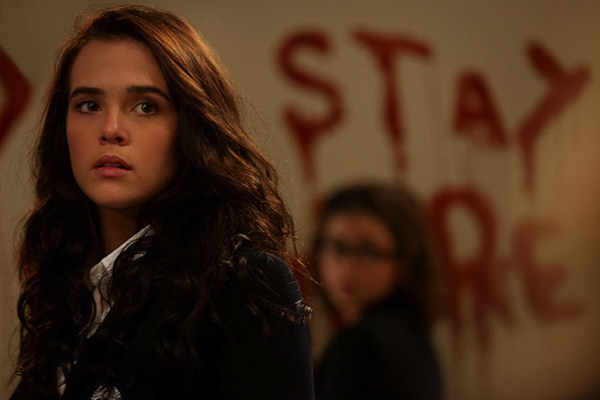 We asked Zoey Deutch what makes her character, Rose, so special.

“She’s not your average vampire. She doesn’t need blood to survive. She can go out in the sunlight. The thing that makes her supernatural would be her unique ability to fight and her heightened senses and abilities in combat. So she’s a glorified bodyguard to her best friend, who is full vampire and is set to be the queen of this society.”

We’ve all seen lots of vampire movies over the past few years. We asked Deutch why she thinks vampires are still so interesting.

“I think there’s a lot of psychological and deeper reasons why humans are so fascinated by vampires. I know Freud did a lot of work as to why that was, exploring the sexual undertones or the idea that [a] person isn’t who they seem to be. I think it’s individual to each person who’s obsessed with vampires. I’ve found that people don’t just like vampires, they are obsessed with them.”

We asked the lovely raven-haired actress if she was obsessed with vampires. “I think I’m more obsessed with people who are obsessed. I think it’s really interesting and I always ask people why they love vampires and it’s always a different answer,” she said.

Given that she’s the daughter of actress Lea Thompson (Back to the Future), we also had to know if she and her mother ever perform together.

“We act together a lot, because I torture her and ask her advice on a lot of auditions. She’s an amazing director — I’m so fortunate to have her help me and impart all her wisdom [to] me. She’s extremely intelligent and an amazing artist.”

Zoey also told us that her sister, Madelyn Deutch, wrote a movie script called The Year of Spectacular Men.

INTERVIEW: Lounging around with Richelle Mead >>

“We’re trying to shoot it later this year. My mother will direct it. It’s based on true events in my sister’s life, after she graduated college. She was trying to find herself and figure out what she wanted to do and it included a bunch of spectacular men in the most sarcastic sense. It’s definitely a dark comedy and it’s hands-down one of the funniest scripts I’ve ever read.”

We can’t wait! In the meantime, we’ll check out this exclusive clip featuring Vampire Academy author Richelle Mead talking about the movie that releases tomorrow on DVD.