We aren’t psychologists, but there is something eerie in the way Beyoncé behaves while her sister is thrashing on her husband. Do you agree? 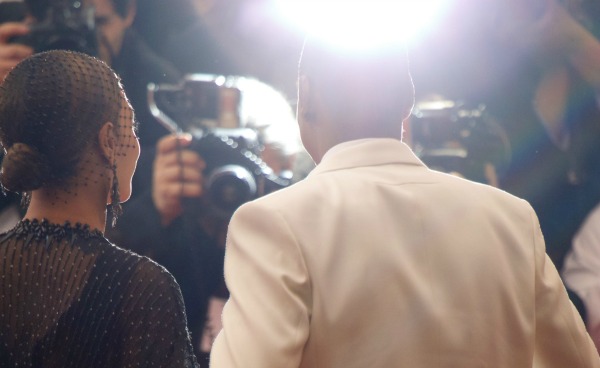 By now, most of us have seen the Met Gala elevator surveillance video showing what appears to be Beyoncé‘s sister, Solange, attacking Mrs. Carter’s husband, Jay Z. While TMZ’s annoying watermark (the logo in the upper corner is sufficient) makes the video appear a little like Bigfoot footage, we can still make out a distinctly hot Solange going after Jay Z. While Solange appears to be saying, “Hold my earrings!” to the bodyguard, Beyoncé does little more than adjust her dress.

Throughout much of the footage, Solange is all z-snaps and “hell no” body language. Jay Z, to his credit, stands in the corner verbally defending himself (it would appear) but not physically. For much of the video, Beyoncé just stands there, back straight against the wall, staring forward. Even when Solange seems to calm down a bit but starts moving toward Queen Bey and her husband again, (2:11 mark in the video) Beyoncé does little more than shift her weight. Are we the only ones who find it mildly disturbing that Beyoncé appears to be more preoccupied with her dress than the passionate altercation between two loved ones?

When physically attacked, most humans have a fight or flight response, meaning you either hold your ground or you run like hell. Beyoncé does neither of these things. Granted, it’s an elevator, so where would she run, but toward the end of the video, Solange is all up in her sister’s business physically, wagging a finger in her face. Those of us who have sisters (and love them to bits) know they can push our buttons like no one else. Beyoncé doesn’t strike us as the kind of woman who just stands there while a feisty sister is waving a finger in her face. Where’s all that attitude and bravado she’s always portraying in her music and in print?

Since no one has issued a public statement about the altercation, we have no choice but to speculate (which is far more fun anyway). Was Solange drunk, so the husband-and-wife duo knew to more or less ignore her? Does Solange have a history of getting liquored up and beating on folks, and that’s why Sasha Not-So-Fierce more or less stood there and then left the Gala with her sister, perhaps to make sure she got home OK? Has Beyoncé, through all her notoriety, become an ice princess who is far more consumed with her image than getting involved in a heated exchange between two people (we have to assume) she loves most? The whole thing is just weird, but it does prove two things that most of us already know — everyone’s family is dysfunctional and most of what you see in Hollywood, on- and off-screen — is smoke and mirrors.