Hasn’t she gone through enough lately? Tori Spelling’s health crisis is just another thing she needs to deal with right now. 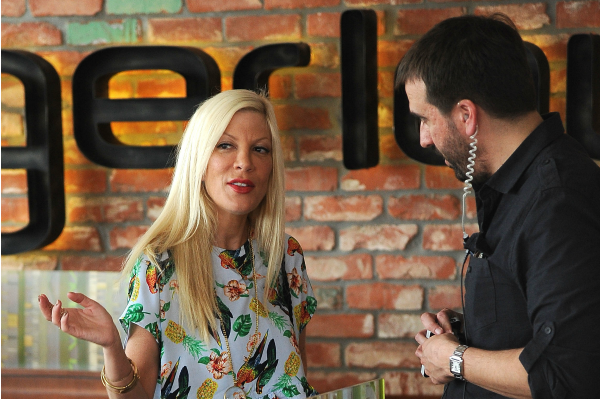 With all that Tori Spelling is going through after husband Dean McDermott’s serial cheating, she might want to take a break. According to the Daily Mail, the petite actress’ health is in serious danger.

While she has lost a lot of weight over the past few months under the stress of taking care of four kids while McDermott was in rehab, Spelling has something even bigger going on. The U.K. publication reported that she is suffering from a cervical spine condition that needs immediate surgery.

A source told the Daily Mail, “Tori has two disintegrated discs in her neck that have been causing her extreme pain.”

She has been warned by her doctors to have the operation as soon as possible; otherwise, she risks doing permanent damage to her body. However, there are so many family issues to deal with right now.

“Tori feels a lot of pressure to bring money in right now,” said the insider. “She and Dean have been struggling, and she knows how important it is for her to keep doing her True Tori reality series and the new Mystery Girls sitcom she and her old friend Jennie Garth are doing for ABC’s Family Channel. Tori believes ratings for her reality series would suffer if the storyline is forced to center around her hospitalization and recovery, and she knows she has to keep working if the bills are going to get paid.”

The 40-year-old mother of four was recently hospitalized for migraines, but the source shared that it was really because of the disintegrated discs.

The source continued, “The pain is so bad, she has to take pain medication. But the longer she takes it, the more meds she has to consume in order to ease the pain. It’s a vicious circle.”

The other worry for the reality star is leaving her husband alone while they are in the middle of reconciling. McDermott wants his wife to put her health first, but she isn’t budging.

“Tori and Dean have been working hard on trying to put their marriage back on track after he admitted to cheating,” summed up the source. “She is still very much in love with her husband and is willing to do anything she can to put the pieces back together. She is afraid that if she spends a week in the hospital, leaving him home alone with the four kids, he won’t be able to handle it.”

Let’s hope this family gets back on track soon.