Jimmy Fallon continues with his funny “Ew!” sketch on The Tonight Show. On Tuesday, Zac Efron and Seth Rogen joined in on the teen-girl fun. 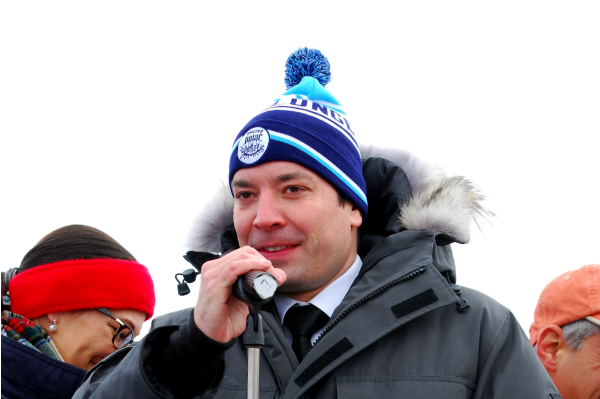 Well, it’s definitely a look, but one that isn’t so pretty. On Tuesday night on The Tonight Show, Zac Efron and Seth Rogen joined the recurring “Ew!” sketch with Jimmy Fallon playing TeenNick host, Sara Wallace.

The best part is the fact that all three performers were dressed in their female best with bows, dresses and even braces. Who looked the prettiest?

The sketch kicked off with Sara introducing her BFF, Allison Donnelly, played by Rogen.

Allison sat on the couch and proceeded to dish on her day, “My mom gave me her credit card so I stopped by Starbucks on the way here”.

Sara responded, “Ew! What did you get?”

And what about that whipped cream? “Ew!” she told Sara. “Of course!”

Efron, playing Brittany Anderson, came into the sketch a few minutes later to talk about her new camera so the group could take some selfies.

Brittany shared, “I’m actually super excited right now because I just got this new phone and it has an amazing camera. It’s got, I think, like, eight megapixels—so it’s like perfect for selfies! I’ve been taking them all day!”

The group of gals posed for some selfies with the all-important Instagram duck lips. The sketch continues on to include a dance party, a nerdy stepdad and a lightning round of “Ew!”

The hilarious skit even ends with a very timely James Franco social media reference. Franco’s going to regret that selfie to an underage teen for a long time…