24 fans, rejoice! The politically charged series is returning to TV, with Kiefer Sutherland at the helm as Jack Bauer. Also returning? The talented Kim Raver, who’ll be reprising her role as Audrey Boudreau. The smart star fills us in on everything from her funniest set to what’s in store for 24‘s star-crossed (former) lovers. 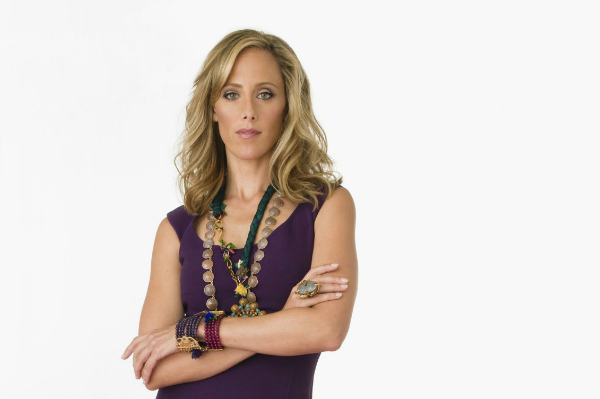 Actress Kim Raver has played an editor-in-chief on Lipstick Jungle, a paramedic on Third Watch, a cardiothoracic surgeon on Grey’s Anatomy and, as of tonight, she’ll be reprising her role as Counter Terrorism liaison Audrey Boudreau on the revived 24: Live Another Day. Looking over these roles, you may get the sense that Raver is drawn toward intelligent — and complex — female characters.

And you’d be right.

“The thing I like to gravitate toward is complicated women roles,” Raver explained. “I think we’re all so multidimensional, and I think it’s really important we get to kind of see that on TV. For me, what usually sticks out is that they’re smart, but they’re also complicated and interesting and vulnerable.”

These also happen to be traits shared by so many of the women she’s had the pleasure of working with, asserts Raver. From Lindsay Price and Brooke Shields on Lipstick Jungle to Ellen Pompeo and Sandra Oh on Grey’s Anatomy, Raver considers herself lucky to have been surrounded by women who — much like the characters she’s drawn to — are beautiful and brainy and nuanced.

“It’s great to have very inspirational women around to be able to work with those kinds of women,” she said. “It’s nice to have other women that are also moms. We’re on TV, but we still have that sort of normal life of moms trying to juggle it all.”

Between that kind of support and the fact that Raver’s sons Luke and Leo are out of the demanding toddler years, the actress is primed for jumping back into the emotionally gripping role of Audrey Boudreau (formerly Raines) on 24. Unlike light-hearted sets such as Grey’s Anatomy, which Raver revealed was a “laugh-out-loud place to work even when we were shooting heavy scenes”, the set of 24 is decidedly more intense.

Of course, Raver was clued into the gravitas of the series at her first (and only) audition for it.

A regular on the series Third Watch at the time, Raver and her manager decided it was time for the actress to move onto a new role — and no sooner had they made the decision, it seemed, Raver was on her way to read for the part.

“Literally, 24 hours later — not to do a play on words — my manager was like, ‘Get on a plane, you’re going to audition for 24. And I went out there and I did three scenes, and they were like, ‘We found Audrey’,” Raver divulged.

“Right off the bat, it was sort of the most intense experience,” she elaborated of the role she describes as an “incredible adrenaline run”

Naturally, working with Kiefer Sutherland only amplifies the heightened sense of awareness on the show. “Keifer Sutherland is an extreme talent and an incredible professional,” Raver said, “and he sets the bar very high, and so everyone wants to be able to kind of reach that standard. So, definitely, you’re full-on going.”

The new version of the series, she says, is much of the same — perhaps, even more so.

“What’s so great about this new season is that it’s a new format, and it just heightens the show,” she enthused. “So it’s kind of the old 24 that everyone knows and loves, but it’s like a revamped version, because they’ve condensed 24 shows to 12 shows, so you kind of get this extreme, caffeinated version of 24.”

Admittedly, there was one storyline in particular we couldn’t resist prying about just a bit — that of Bauer and Boudreau. Sure, she’s remarried… but it’s not like the book has been completely closed on the saga of Jack and Audrey. Right?

“You know, for me, I’m this hopeless romantic,” Raver mused. “I love the whole relationship between Jack and Audrey, and that is definitely visited in this season, so of course that’s really exciting for me.”

So, in a series so fraught with tension and suspense and, well, impossibly challenged romance, how does Raver unplug from those protracted periods of extreme emotion?

“There were such intense scenes — the torture scenes and the crying — I found that I had to kind of find my way as I was going, and I realized that I had to do sort of like a 20-minute warm down to be able to leave that at work and not take it home,” she explained, continuing, “And I think that’s where the running and the yoga come in… just to kind of stay on an even, healthy keel.”

In that vein, Raver is also proud to be partnering with Colgate Total Advanced Whitening to spread the word about National Women’s Health Week, May 11 – 17.

“As a mother and actress, living a healthy and balanced lifestyle is important to me,” she told us. “I think this is a great week for women to pause and think about their health as we approach summer. For me, it’s not just about working out to look good in a bathing suit, it’s taking steps to improve your overall health. I think health and beauty are multidimensional and it’s important to focus on both — when you’re trying to look good, you have to feel good.”

Raver’s tips for having a healthy summer (and year!)

• The time leading into summer is great to schedule doctor, dermatologist and dentist appointments. Try to fit in those appointments you may have been putting off or not had time for during the winter.

• Raver makes sure to use products in her everyday routine that address health and beauty, like Colgate Total Advanced Whitening, which gives her a healthier and whiter summer smile.

• Put your sunscreen or a moisturizer with SPF in your makeup bag or drawer as a reminder to apply every morning when doing your makeup — Raver tries to do it all year round, but it’s especially important in the summer when you’re outside more!