Star Hayley Orrantia talks about The Goldbergs geeking out for Star Wars, plus what’s coming up for her character, her favorite things about the ’80s and more. 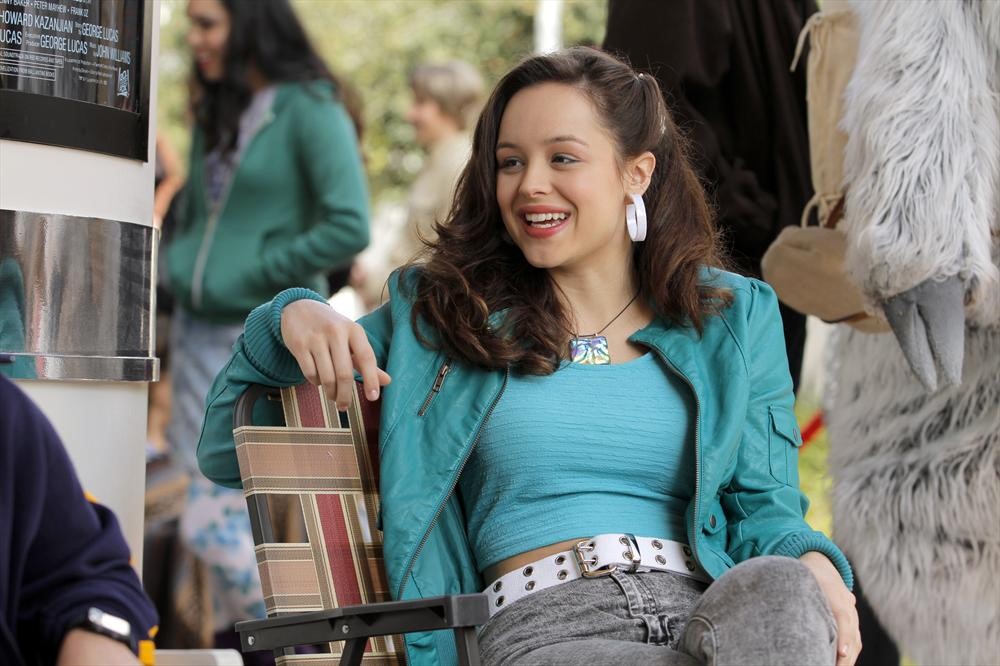 This week a lot of Star Wars fans are geeking out over the franchise’s unofficial holiday, May 4. Dubbed “May the 4th Be With You,” it’s a day for fans to let their geek flags fly high, re-watch their favorite versions of the films, play the video games, dress up and even bake goodies shaped into likenesses of the film’s famous characters.

ABC’s The Goldbergs decided to get in on the Star Wars mania this week. The May 6 episode, “A Wrestler Named Goldberg,” revolves around the 1983 premiere of Return of the Jedi.

SheKnows spoke exclusively with star Hayley Orrantia about the Star Wars episode, as well as what fans can expect from her character this season, her thoughts on the ’80s and more.

Orrantia was born about 10 years too late to be a part of the original Star Wars mania, which meant that this week’s episode came as a bit of an education into the famous franchise.

“I don’t follow Star Wars too much, so when they first told me, [I thought], ‘Oh, OK, this should be interesting, I guess.’ But once we actually started filming the episode, it [became] probably one of my favorite episodes because of the people they have coming in, the storyline, the writing.”

Her education into the franchise began at home, but she learned a lot more while filming the episode. “My aunt is a huge Star Wars fan and she actually showed me the movies when I was younger. I just haven’t seen them in years,” Orrantia revealed. “I kind of learned more about different characters that were in the movies and things that happened in the movies, through this episode. It was fun. I’m not a huge Star Wars fan, still, but I’m definitely a Goldbergs’ Star Wars fan.”

Orrantia also warned fans to expect some changes from Erica in the episode. “When it comes to my character, Erica, you’re going to see a side of her that you didn’t expect. She gets to hang out with her younger brother Adam and they kind of go on this Star Wars adventure together.”

After this week’s episode, there are just two left until the season finale. Asked to talk about what else was coming up for her character, Orrantia revealed why an upcoming episode became one of her favorites to shoot.

“Erica has a love interest that you see through one episode,” Orrantia said. “That’s actually one of my favorite episodes that I filmed because I kind of put a lot into my acting, [something] that I haven’t really been able to do in the other episodes. So that one is really special to me. And you actually see Barry get a little more social.”

The role has had its challenges, especially for only-child Orrantia. “[It’s hard] trying to relate to the idea of having siblings, because I don’t have siblings in real life. So when there are certain situations where naturally my character would want to give my younger brother a noogie, I’ve never had that before, I don’t know what that’s like, so trying to relate to that kind of stuff is a little more challenging to me.”

One thing that’s not a challenge is getting into the ’80s styles and music.

“I wasn’t too familiar with the ’80s. Everything I knew about it before was the off-the-shoulder shirts and all the colors. Now that I am actually working on the show a lot of people have helped me to get an idea: from my parents, from Adam Goldberg, from the ladies in wardrobe. I just learned more about the music, which I actually enjoy, and the clothes I’m a little worried about because everyone says, ‘Thank god we’re done with the ’80s and crazy clothes.’ But there’s a lot about it that I actually like. So I have learned a lot more from working on this show, which has been great. It’s great to know about the time that my parents grew up [in].”

But it’s not the clothing or the music that Orrantia has grown to love the most about the ’80s. “We didn’t have cell phones then, and computers were a lot more limited in what they could do, and because of that you were kind of forced to spend more time with family and friends in real life and not virtually,” Orrantia said. “So I kind of enjoy the story lines that deal with that. The kids play outside and it’s a very different situation now, and I really have grown to appreciate it.”

Now that The Goldbergs has wrapped its first season, Orrantia will be taking some time to focus on her music. She took a trip to Nashville to being writing. “Hopefully by the end of the year I’ll be able to show something from the work I’ve been doing.”