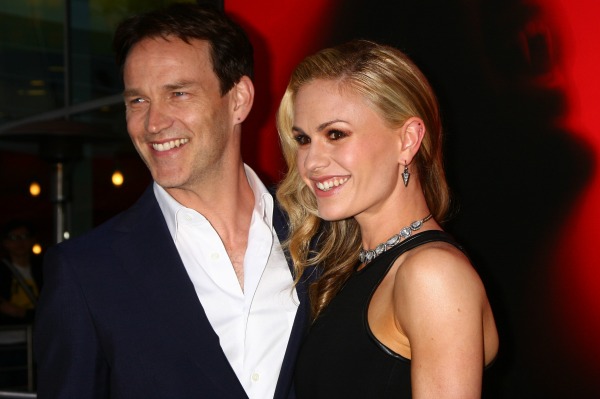 How is it possible that two of the biggest stars on HBO’s True Blood managed to stay off of Twitter until 2014? That all ended on Friday, when Anna Paquin and hubby Stephen Moyer finally joined the social media site.

They both kicked off their profiles with a couples’ selfie showing the two embracing in the sunset. Both are sporting dark glasses, with Moyer also keeping a bit of scruff on his face.

The bios on their profile are even adorable. The 31-year-old mother of twins described herself as a “Producer, hot sauce enthusiast, surprisingly functional former kiddie actor.”

Moyer shared that he is an “Actor, director, producer, bacon lover.”

They are already verified by Twitter with the signature blue checkmark badge. Paquin has 13,700 followers, while Moyer has 11,000 followers. The X-Men star chose to follow 65 friends, including Malin Akerman, Dianna Agron and funnyman Steve Martin. Moyer was a bit more selective, following only 34 people, including True Blood costars Joe Manganiello, Carrie Preston and Kristin Bauer.

The couple married in 2010 and started a family in 2012. Twins Charlie and Poppy are the duo’s first kids together. Moyer has two kids, son Billy and daughter Lilac, from a previous relationship with journalist Lorien Haynes.

True Blood: The Final Season will premiere on June 22.