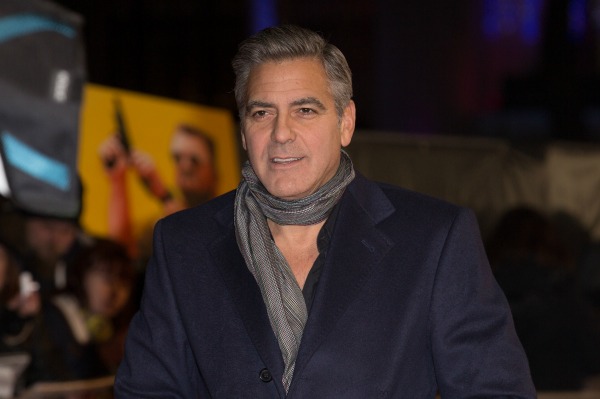 Even though George Clooney has been making headlines for getting engaged lately, there’s a tiff he was involved in that just won’t go away. The Monuments Men actor got into quite the argument with casino owner Steve Wynn over President Obama and his Affordable Care Act.

On April 23, while the two were out to dinner with a group of eight people, Wynn allegedly called the president an “a**hole.” Clooney defended his close friend after the Las Vegas mogul continued to bash him.

George Clooney gets in drunken tiff with Vegas bigwig >>

The war continued on Friday after the Wynn Resorts Ltd. CEO went on Bloomberg’s Market Makers and denied ever saying such a thing. He even called Clooney “mollycoddled” and implied the actor had imbibed too much at dinner.

As a result, the 52-year-old star released a blistering statement to People.

Clooney wrote, “Steve Wynn and I have met three times, two times for dinner. That is the extent of our knowledge of one another, so I will refrain from trying to categorize him based on the little time we’ve spent together, but I will not let his version of the truth go unchallenged.

“He now says he didn’t call the president an ‘a**hole.’ That is false. He bellowed ‘I voted for the a**hole,’ and then called him the same thing several more times as the dinner came to an abrupt end.”

Cindy Crawford was accidentally in bed with George Clooney >>

Clooney went on to refer to the fact that Wynn’s antics were witnessed by more than just one person.

He continued, “Again, there were eight people at the table, eight witnesses. I did, in turn, call him the same body part and walked out. Again, he can make up whatever story he wants, but these are the facts. He said I drank 16 shots of tequila. I didn’t drink one shot of tequila — not one. We were drinking, but it was early, and we still had two events to attend.

“He said I live in a bubble. More of a bubble than Las Vegas? Honestly? He says I’m ‘mollycoddled,’ that I’m surrounded by people who coddle me. I would suggest that Mr. Wynn look to his left and right and find anyone in his sphere that says anything but ‘yes’ to him. Emphatically. I did not attend a private boys’ school, I worked in tobacco fields and in stock rooms and construction sites. I’ve been broke more of my life than I have been successful, and I understand the meaning of being an employee and how difficult it is to make ends meet.”

That’s when Clooney went straight for the kill and hit Wynn right where it hurts: his pride.

The Oscar winner summed up, “Steve is one of the richest men in the world and he should be congratulated for it, but he needs to take off his red sparkly dinner jacket and roll up his sleeves every once in a while and understand what most of the country is actually dealing with… or at least start with the fact that you can’t make up stories when eight people who are not on your payroll are sitting around you as witnesses.”