So it isn’t so! Ronan Farrow is reportedly wearing blue-tinted contacts to make his eyes look bluer like alleged dad, Frank Sinatra. 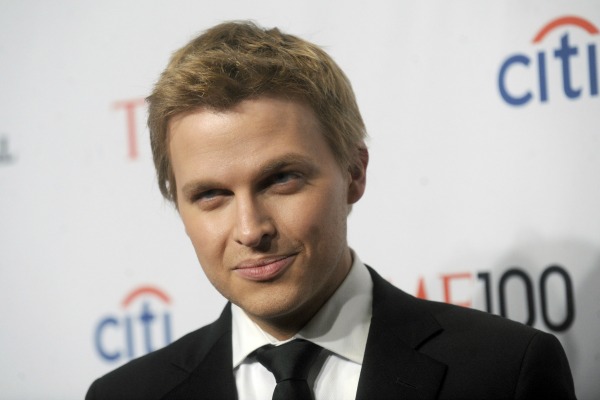 Is Ronan Farrow fueling the speculation that he’s related to “Ol’ Blue Eyes” himself by wearing blue contact lenses? That’s exactly what Page Six is reporting.

According to their sources, he’s been wearing tinted lenses to make his eyes appear closer to Frank Sinatra’s blue coloring. Back in October, his mother, Mia Farrow, speculated in a Vanity Fair article that it was Sinatra, not Woody Allen, who fathered her son.

At the Time 100 Gala on Tuesday in New York City, an insider shared, “You could see the outline of his contacts”.

A Ronan pal did confirm that the MSNBC host wears contacts. The friend said, “He’s blind as a bat, they are prescription contacts. They are tinted white, but they do make his eyes brighter blue.”

Even Woody Allen has mused about whether he is the biological father of Ronan. In a New York Times op-ed piece in February, he wrote, “Is he my son or, as Mia suggests, Frank Sinatra’s? Granted, he looks a lot like Frank with the blue eyes and facial features, but if so, what does this say? That all during the custody hearing Mia lied under oath and falsely represented Ronan as our son?”

It’s really hard to deny the resemblance between Frank and Ronan, but the 25-year-old newsman is trying hard to focus on his show, not his family controversies.

He told Page Six, “I think it’s important to tune out some of the noise, do your job, keep your head down”.

While we might never know the truth behind Ronan’s paternity, he sure is doing his best to subtly keep the mystery going.