Wait, will Enzo come back from the dead? The Vampire Diaries‘ Michael Malarkey spilled on the details on the final episodes of Season 5. 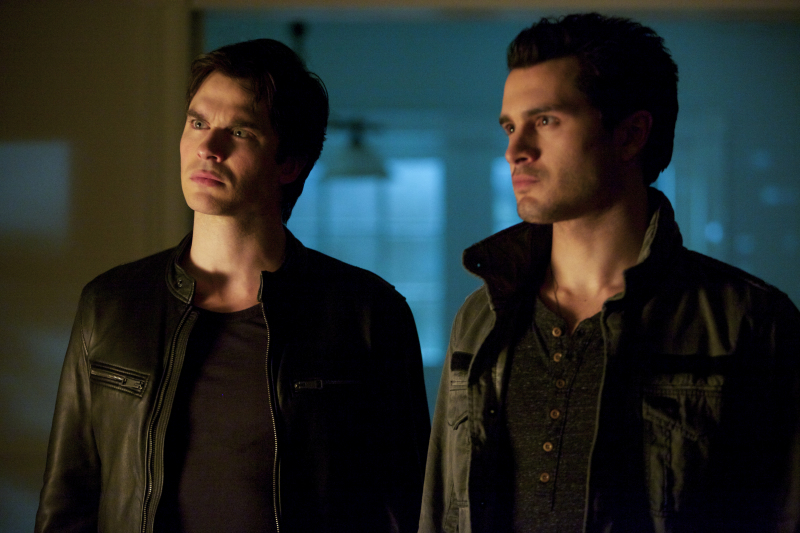 The season finale of The Vampire Diaries is right around the corner and, as we said in our review for last week’s episode, we have no idea where we’ll end with the relationships on the show this season. Luckily, Michael Malarkey, who plays this season’s bad boy Enzo, gave us a few pointers before the season finale — specifically, on the status of Caroline and Enzo. Enzo may be dead, but things are far from over.

“You’ll have a cute little moment in the coming episodes,” Malarkey told us of his character and Caroline (Candice Accola). “The thing is with Enzo and Caroline, I think she’s trying to figure out what she wants, and she’s not sure at the moment. I think she’s very wary of Enzo. I mean, she’s just witnessed him kill a bunch of people in front of her, so I don’t know who in their right mind would rush to want to be with someone like that.”

To which we pointed out that if anyone would want to rush to be with someone like that, it would be Caroline. She loves those bad boys!

“Yeah, maybe it does turn her on a little bit,” Malarkey admitted with a laugh.

“I quite like the fact that he’s kind of a solo, renegade dude,” Malarkey continued. “But, however, a little fling with Caroline would be pretty good drama. They have a dynamic together. It’s quite funny, a lot of witty comments and stuff, and I think that would play out quite nicely on screen.”

We have to agree. We’re still Team Klaroline, but… Enzo just might win us over. If anyone could, it would be Enzo. He just has to come back from the dead first.

Fantasy gets another year. The CW announces early renewals >>

Another character Enzo has a great dynamic with is Damon (Ian Somerhalder), of course. They have an epic bromance almost as great as Damon and Alaric’s. (Again, we need him around a bit longer before we really decide.)

And don’t worry, there’s hope these two will reconcile in the near future.

“I think there’s a possibility of it,” Malarkey said, “just as with any friendship that stretches beyond 50 years, but at the moment, Enzo’s been pretty badly hurt and betrayed numerous times by his mate. I think it’s going to be a little bit more difficult for the reconciliation to happen if it does.”

Aside from relationships, expect a roller-coaster season finale to head our way.

“Once Enzo realizes what’s happening to the other side, he makes the decision, ‘Okay, I think it’s better to be back to the land of the living than here.’ And he does everything in his power to try and escape whatever the h*** is going on with the other side because it’s menacing, which you will see in the next three episodes. It’s pretty, kind of, scary. He definitely turns to having a one-man mission to get back to the land of the living.”

There is also the possibility of redemption after all of Enzo’s bad deeds. Malarkey has a pretty positive outlook on his character. “I don’t consider anyone truly bad. I think Enzo’s just kind of misunderstood. But you will see some kind of dodgy dealing on his part.”

We would expect nothing less.

There are only two new episodes left in Season 5 of the show. The next episode of The Vampire Diaries airs May 8 at 8:00 p.m. on The CW.