New Kids on the Block is gearing up to set sail on a cruise ship with fans for a new reality TV show, which will air on the TV Guide Network. 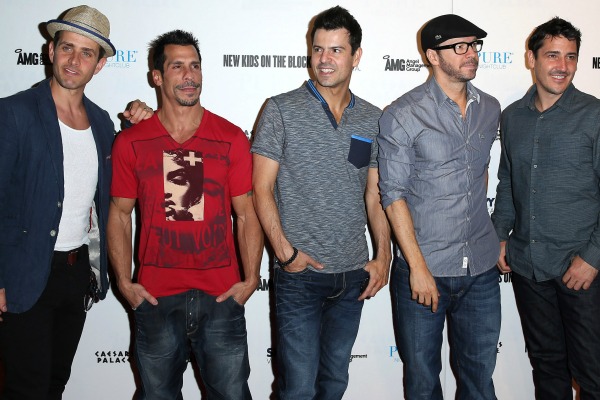 You have to admire their hustle. After multiple comeback reunion tours, NKOTB is keeping their momentum going with a brand-new reality series.

But this isn’t just any old reality show — Jonathan Knight, Jordan Knight, Joey McIntyre, Donnie Wahlberg and Danny Wood are actually heading out to sea to film the eight-episode series, which will take place on a boat cruise along with some of their biggest fans. The TV Guide Network announced the upcoming project, which is currently being dubbed Rock This Boat: NKOTB, on Tuesday, April 29. In addition to the eight episodes, the network will also air a 30-minute casting special called Rock This Boat: NKOTB.

According to a press release from TVGN, “cameras will follow the fun, free-spirited voyage of a few select groups of super fans at sea with the band mates.” New Kids on the Block is the first group to headline the Rock This Boat series. Donnie Wahlberg will serve as the show’s executive producer. Additional acts set to take the sea on upcoming seasons have yet to be announced.

It’s likely the show has yet to begin filming after taking a look at the group’s official website, which lists details for an upcoming boat cruise that begins on June 5. According to the website, the one-of-a-kind ship will leave New York City and visit Bermuda. Not only will passengers be treated to day and nightly themed deck parties, they’ll even have a free day to explore in Bermuda.

No word on whether or not the band will actually hit the stage to perform during the cruise, but if so, let’s hope bandmate Jonathan Knight is doing better with his stage fright issues. Just last April, the singer walked offstage about halfway through the group’s iHeartRadio show set, and many believed it was because of his longtime battle with anxiety.

News of the New Kids on the Block reality series shook up social media just a day after the announcement with the story catapulting its way to Facebook’s top trending list.