To celebrate 40 years of making music, the band is releasing a double album that includes not only their greatest hits, but also a new collection of forward-thinking dance tracks, including a cover of one of the best ’80s songs ever. We sat down with Blondie front woman Debbie Harry to find out more. 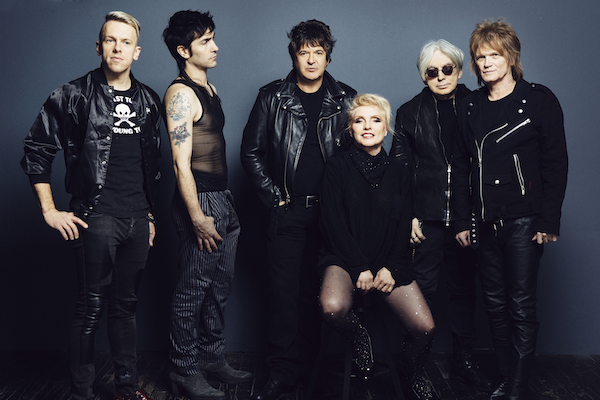 Blondie fans everywhere are rejoicing about the new album, but Debbie Harry readily admits she never thought the band would get back together.

“I thought it was sort of a problematic situation, contractually. We had a lot of business problems that I didn’t think could get straightened out.” Lucky for us, they did.

We asked the woman with a “Heart of Glass” about the different cultural influences on the new songs. “Coming from New York City, we always experienced a lot of different kinds of music and it’s always been readily available on radio and records. It’s a multicultural city and we’ve always benefited from that.”

Those of us who still think ’80s club music is totally rad are excited about Blondie’s cover of Frankie Goes to Hollywood’s “Relax.” Even if you think you know the song, this version will surprise you. We asked Harry why they decided to cover it.

“We had been doing the song live, sort of with a rock feel, then we decided to record it. Our producer said we have to do something different with it. So we started from a dark place, made it this ballady, kind of dark thing.”

The eerie-sounding backup singers were a delightful afterthought. “We just happened to meet them at the studio where we were recording on 14th street. They were working on something else, and we just added them in. They were terrific!”

We asked the “Tide is High” crooner about creating her signature style when she first appeared on the music scene. She’s famous for combining glamour with punk and turning rebelliousness into success.

“I don’t know if it was my single-handed effort, but it was a sign of the times. Sort of form following function, and economics. It was a time of DIY. There weren’t a lot of people working with designers or stylists. Later on, my rough edges were organized better by Stephen Sprouse, who I think was one of the greatest designers to come out of New York City. He had a huge influence on me.”

We had to ask the longtime pop punktress about today’s pop shocktress, Miley Cyrus. Does Harry think Cyrus’ reputation for being a ratchet girl is a good thing?

“The whole point of rock and roll is the forbidden fruit and the clandestine — that’s what excites younger people who want to express themselves and their sexuality. Sometimes, they’re not allowed to. I think Miley probably started out with a very, very young audience and she was an easy pill to swallow. Then suddenly, she became this completely sexual being and probably blew a lot of people’s minds.

“I guess [Cyrus] came of age — legal age or mental age, I don’t know. I’ve only met her once — it was at our New Year’s Eve show in Times Square — and we just sort of said hello to each other. But I think she’s an entertainer and she comes at it from that point of view. She’s come up as a kid in the entertainment industry and she’s a good singer. It’s all become more personal to her now and you have to respect that, even if it’s not your taste. She’s a person who’s stood on her own.”

The one pop star Debbie Harry truly loves? Justin Timberlake. “My god, what a talent!” she said.

After performing for four decades, we asked her what her inner monologue is like now when she gets onstage. She paused, then jokingly gasped, “Ahhh!”

Then Harry grew more serious. “My inner monologue at a certain point dissolved into, ‘Wow, this is my job, this is what I do.’ Fortunately, I love what I do and it’s finally sunk in. It became just sort of heavenly and technically, everything has become so much better onstage. It’s a lot easier for a singer to front a band, now.”

We’re just so thrilled Blondie is continuing to make music.

The new, two-disc package Blondie 4(0) Ever, which includes a greatest hits album and a brand-new album Deluxe Redux: Greatest Hits, is available on May 13. Get it “One Way or Another.”

HUNGER TV: DEBBIE HARRY – ‘SUGAR ON THE SIDE’ from Hunger TV on Vimeo.