Without skipping a beat, Timeflies duo Cal Shapiro and Rob Resnick fill us in on their new album, their favorite vices and everything in between. 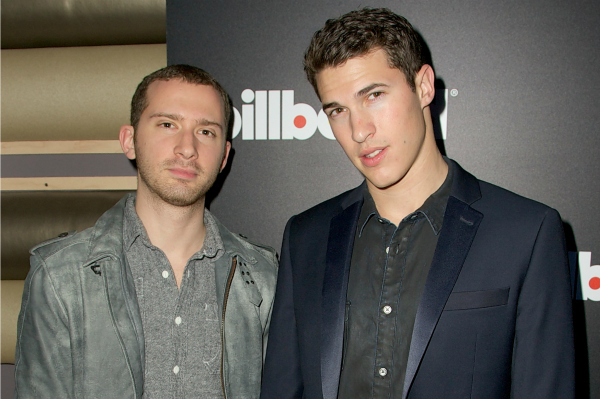 Seven years ago, Cal Shapiro and Rob Resnick were just two guys at Tufts University, each unaware of the other. Until, that is, fate stepped in… in the form of a college party, at which Shapiro wound up rapping over Resnick’s beatboxing.

In 2010, they formed their own band, Timeflies, and by 2011 they’d dropped their debut album, The Scotch Tape. And, today, they’re on the precipice of another major milestone — the release of their first full-length album under their own label, Forty8Fifty.

VIDEO: Go behind the scenes of American Authors’ new video for “Believer” >>

Although their rise has been swift, the guys had little notion back at Tufts that their musical extracurriculars would evolve into something more. “We’d love to tell you that we saw a vision of it, but no… not even a little bit,” said Shapiro, noting that “Rez,” as Resnick is known, missed the speaker at their graduation because he was uploading a new song.

“We didn’t even look for jobs after college,” he laughed. “We were just like, ‘Let’s just mess around and make an album.’ And that —The Scotch Tape — is still one of our favorite projects we’ve ever done.”

It’s no wonder the album is one of the guys’ favorites, though. It is, after all, named after Shapiro’s favorite vice: scotch. As in whiskey. That’s not the only stiff drink Timeflies enjoys, as it turns out.

When asked what other vices they have, the guys joked, “Um, all of them?”

“Vodka has worked its way back into my life. It’s a real constant for us,” said Shapiro. “We also love Patrón… love Patrón,” chimed in Rez. “There’s nothing better than waking up after a morning of having all of those and really just regretting all of it.”

Shapiro couldn’t agree more. “If you’re not regretting something from last night,” he mused, “you did it wrong.”

How has Mary Lambert’s faith changed since “Same Love”? >>

Regrets and all, Shapiro and Resnick — whom Vanity Fair has dubbed “musical masterminds” — are clearly enjoying the ride. Last year, they were named one of Billboard’s 13 Artists to Watch in 2013, and in August they performed at Lollapalooza, which they said was “amazing.”

The adoration from their loyal (read: fanatical) fan base is simply another part of the experience that seems surreal, but for which they are obviously grateful.

“The other day, this girl came up and showed us a place that had a little crystal angel on it, and she said, ‘You saved my life,'” Shapiro shared. “Then she lifted up her hair and she had one of our lyrics tattooed on the back of her neck. It just gave us chills.”

When it comes to the musicians they are fans of, Shapiro and Resnick cite a diverse mix of influences (think Janis Joplin and Muddy Waters) and contemporary artists. “I’ll buy all the new albums just to hear what’s going on and see what everyone’s up to… I can’t stop listening to J. Cole’s album from last year, Born Sinner,” said Resnick. “And a lot of Katy Perry,” Shapiro added with a laugh.

And while two super-talented and cute guys admitting they listen to Katy Perry on loop is irresistible, the fellas of Timeflies admit that there’s not much time for dating.

“It’s really tough being on the road and having time for that,” Shapiro divulged. “It’s definitely difficult to be a touring musician. But we do love each and every one of our fans, and it feels like we’re in a relationship with all of them.” A notion, joked Resnick, that was “freaking me out.”

When After Hours drops on April 29, Shapiro and Resnick hope their fans love the new album as much as the guys enjoyed working on it.

“It’s been awhile since we’ve gotten to do a full-length album, so it was exciting for us to be able to do both the club songs and the more ballad-y stuff,” Resnick said. “It’s a pure and better and more expanded view of what we want our music to sound like.”

As far as their favorite track on After Hours, the guys are in consensus at the moment. “I think both of our favorite is ‘Monsters,'” Shapiro revealed. The track came out last week. “It’s featuring Katie Sky, who has an incredible voice. It’s really one of the more deep tracks that we wrote on the album, so both musically and lyrically, it’s probably our favorite.”

But it’s a hard call, they admit, because they believe so much in the entire album. “We got to spend a lot of time on this one and work with a lot of real instruments as opposed to just making tracks in our room, so we’re really proud of After Hours.”